Are you a vintage basketball collector looking for the most valuable Patrick Ewing cards?

In his four-year stint with Georgetown, Patrick Ewing has gone down in history as one of the greatest college basketball players of all time–16th greatest, according to ESPN in 2008. His career didn’t end at Georgetown, though.

Ewing spent the majority of his NBA career with the New York Knicks playing center before spending some brief time with Orlando Magic and Seattle SuperSonic. While with the Knicks, Ewing led the team to the NBA finals twice and earned recognition as one of the 50 greatest players in NBA history.

During this time, Ewing also represented the U.S. on the U.S. basketball team for the Olympics in 1984 and 1992. Returning to his roots, Ewing is the current head coach for the Georgetown Hoyas.

Throughout his illustrious career, Ewing not only garnered 11 all-star recognitions and two inductions into the Basketball Hall of Fame but many coveted basketball cards. From his beginning with the Georgetown Hoyas to the very end of his career with the Seattle SuperSonic, Ewing has many valuable basketball cards in circulation.

While he has many basketball cards out there, we’ve narrowed down the market to the 15 most valuable. To do so, we’ve taken a look at the cards’ PSA, price, condition, and when in Ewing’s career they’re from. 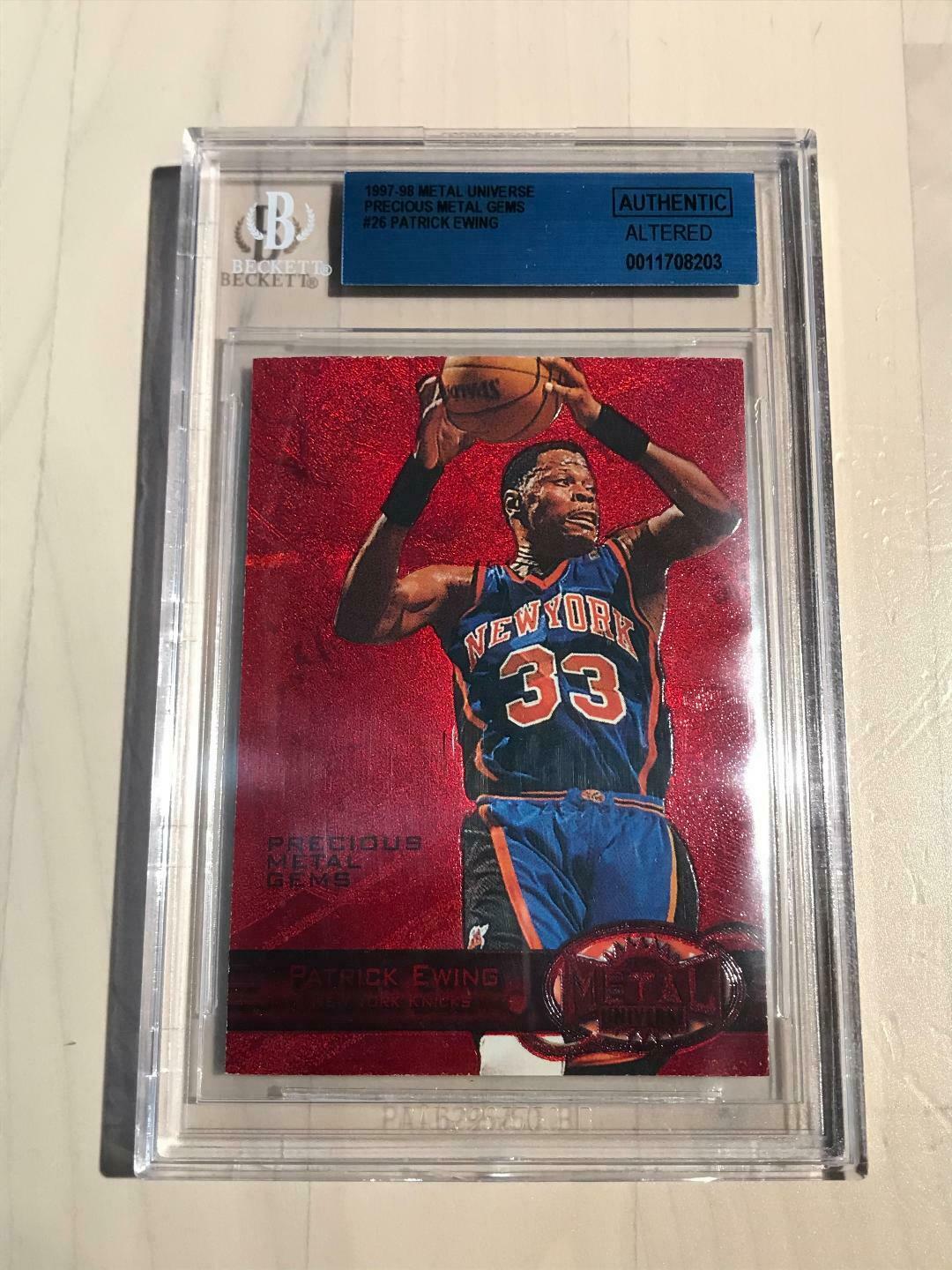 Among the rarest basketball cards out there, the Metal Universe Patrick Ewing Precious Metal Gems basketball card in red sells for upwards of $5,000. These cards come in either red or green foil, making them prone to flaking and chipping. 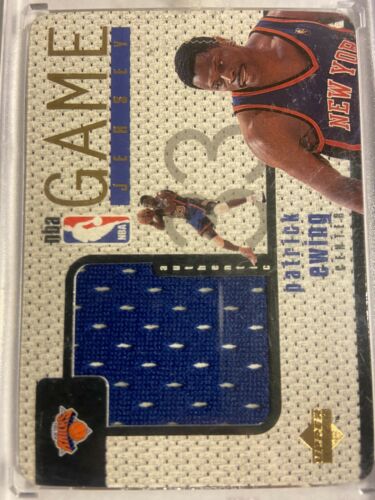 The 1997-98 Upper Deck Game Jersey basketball card set consisted of 22 cards, all of which got randomly inserted into packs at a rate of 1 card per 2,500 packs. These cards were and are extremely rare to come by and contain actual game-worn fabric from the related player’s jersey.

Ewing’s authenticated Upper Deck Game Jersey card from 1997-98 ranges upwards of $1,000 because it’s so rare and unique. While this card does not have a specific PSA rating, you can expect a like-new condition with minimal to no damage. There’s also a pre-owned edition of the card that has a lower bidding price, but you can expect that card to exceed $1,000 as well. 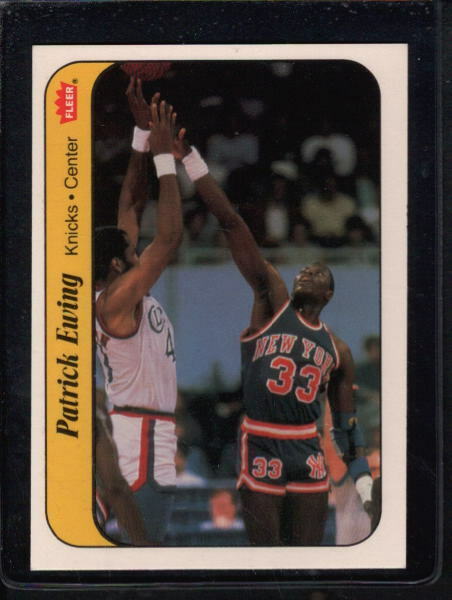 Since this 1986 Fleer basketball pack came as stickers, finding cards with high PSA’s and in excellent condition is difficult. This card is also more valuable because limited quantities exist. Since finding high-quality conditions is challenging, you can expect the Ewing 1986 Fleer sticker to range into the high $100s for a GEM MT condition. 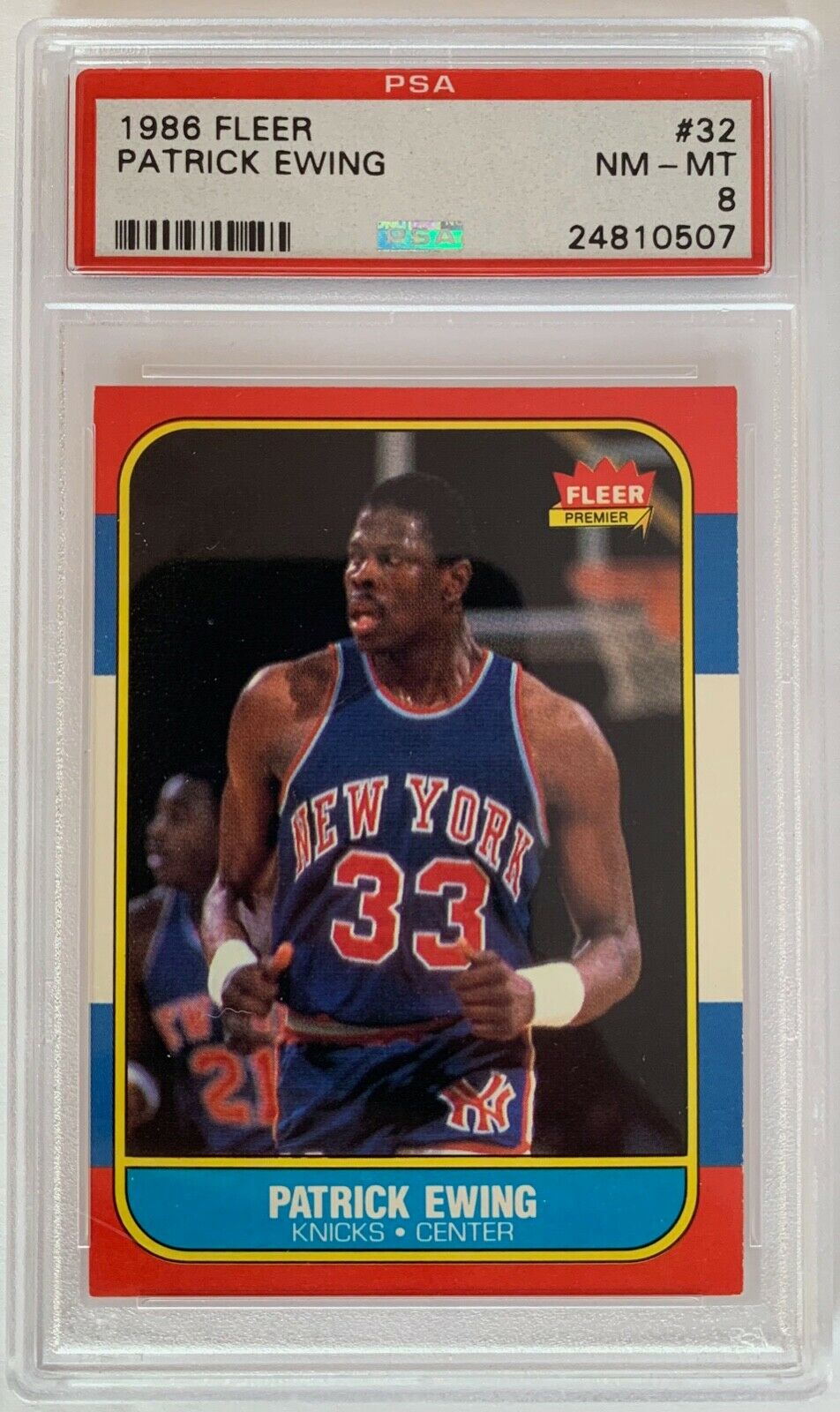 This 1986 Fleer card for Patrick Ewing gained notoriety and popularity because, during 1986, Ewing received the NBA Rookie of the Year Award during this time. Although, this 1986 Fleer pack cultivated popularity entirely.

For Ewing’s card, you can expect prices to increase for GEM MT ratings. A GEM MT card will typically cost upwards of $1,000 while those in NM-MT remain in the hundreds. Even with an NM-MT rating, the card still maintains an overall high PSA of 8. 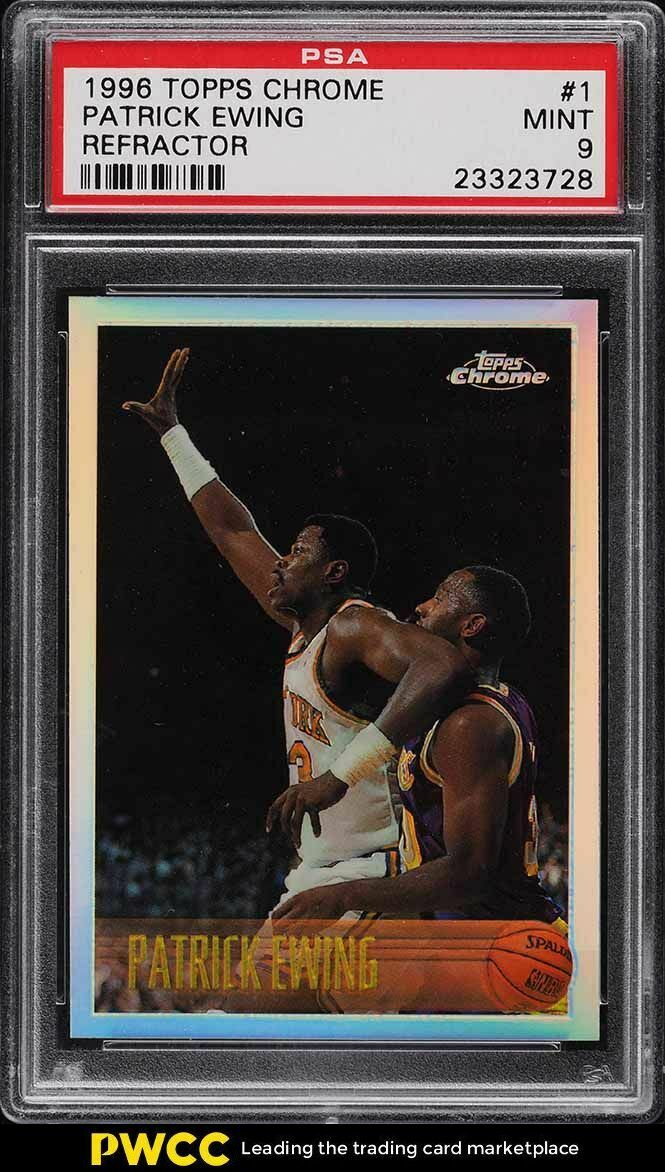 While the 1996 Tops Chrome basketball packs came in a high volume, finding a card in good condition is hard to come by because the distinctive chrome bordering is prone to damage. Ewing also served as this pack’s anchor card, making it more desirable.

In mint condition with a 9 PSA, the Ewing 1996 Tops Chrome Refractor card’s price ranges within the $100s. 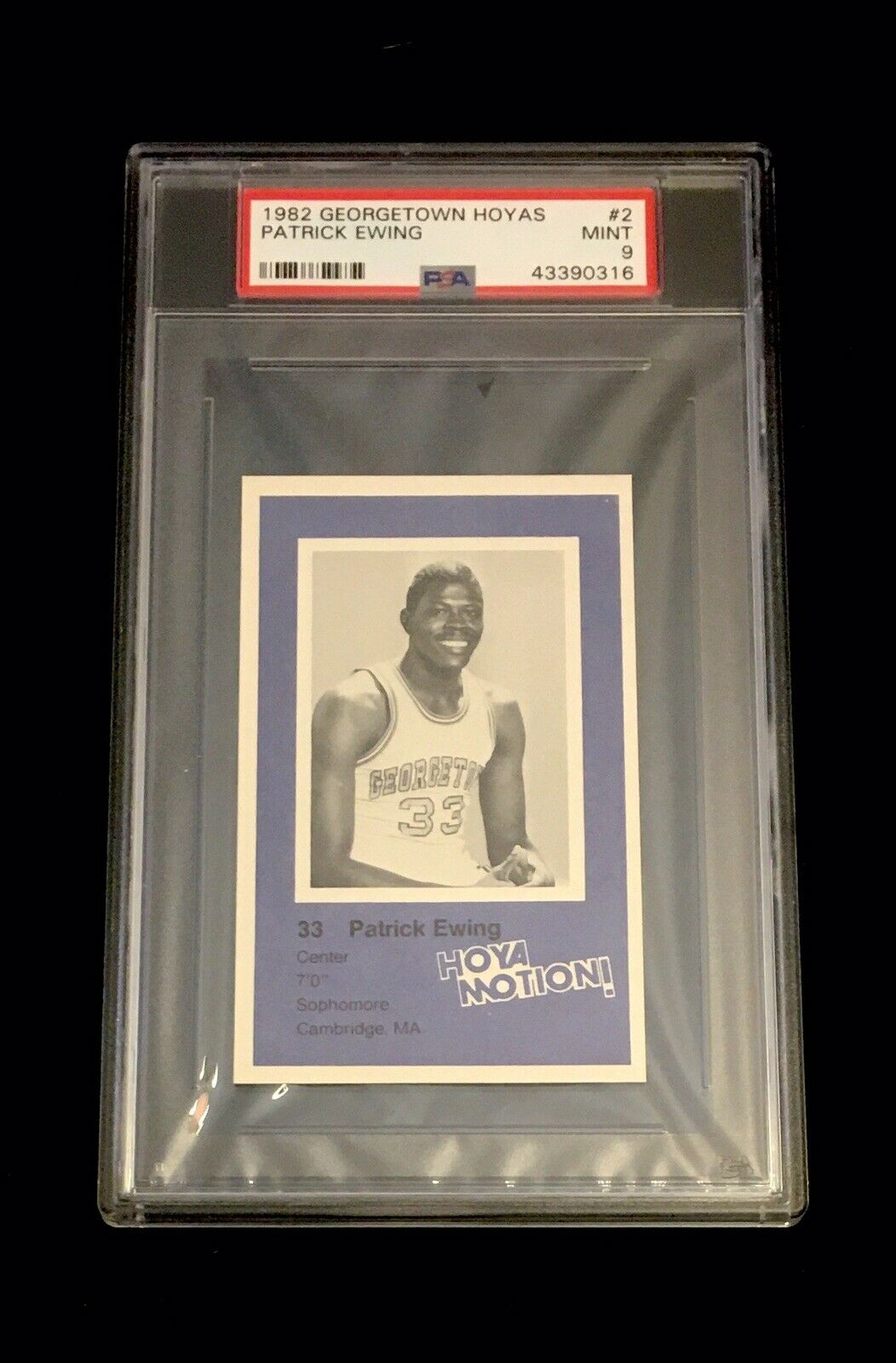 While college-level basketball cards are not as coveted as NBA cards, Ewing’s 1982 Georgetown Hoyas card has a limited circulation volume of fewer than 100 cards. This limitation makes the card valuable, but the card’s mint condition and 9 PSA make the card highly sought-after.

This Ewing rookie card can sell anywhere between $100 and $1,000, while not as rare or desired as some of the previously mentioned cards. 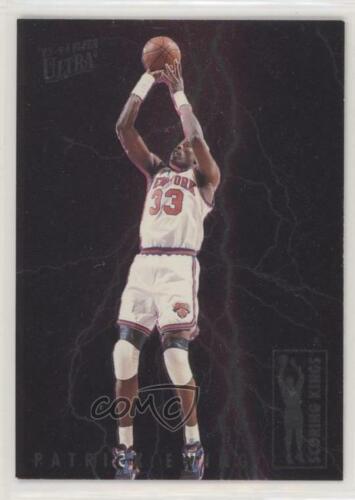 The 1993 Patrick Ewing Ultra Scoring Kings basketball card highlight’s Ewing’s scoring success rate during his NBA career up to 1993. The card has increased circulation, making it not as rare or popular as some of Ewing’s earlier cards, but with a high-quality condition, this card ranges up to $100. Some issues with centering for the card may influence the price.

As a Row 1 card within the 1996 Flair Showcase basketball card set, this Ewing card was more common than the set’s Show Stopper cards, making it less valuable. However, the card’s sleek design and multiple images make it desirable from an appearance standpoint.

Plus, the card has a high PSA of 9 and is in mint condition. Even with those distinguishing factors, the card is relatively low priced, running up to, but typically not over, $100. 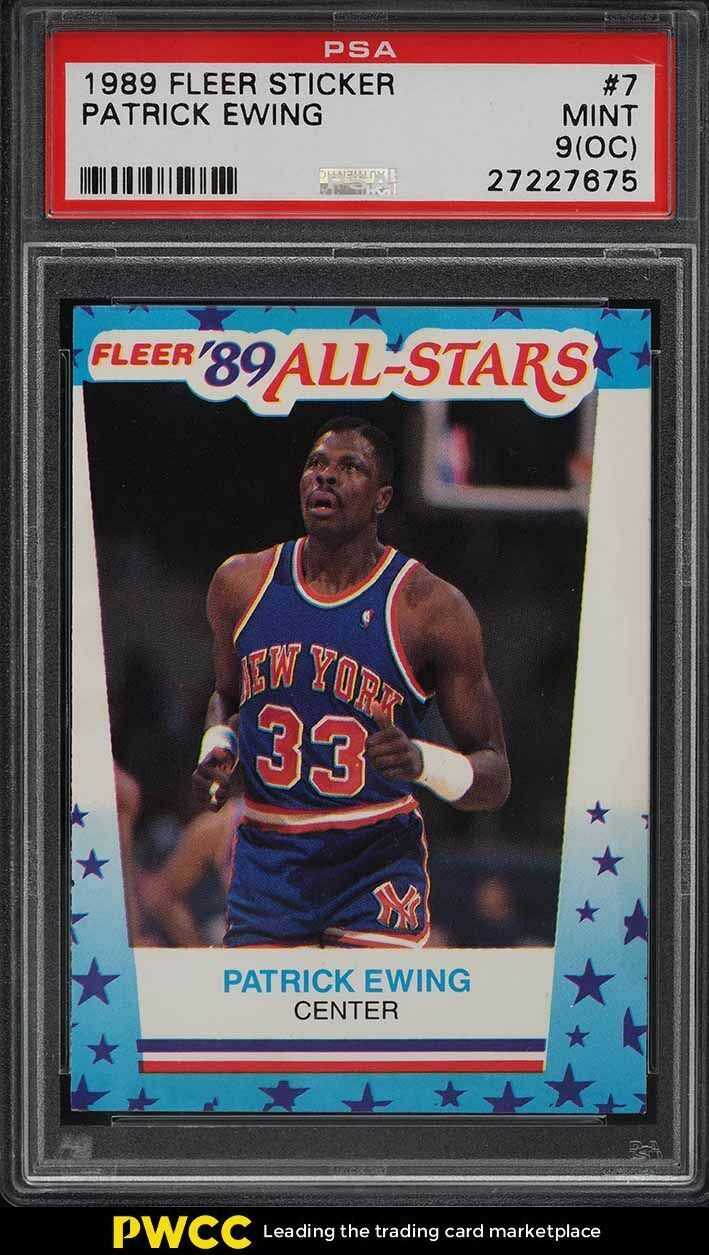 The 1989 Fleer Patrick Ewing card #7 has a high-ranking PSA score of 9 OC, making it more valuable than those with lower scores. However, since the score is conditional based on the card’s poor centering, it is not nearly as expensive or valuable as cards with a higher PSA.

The card ranges in price, but the bidding starts at an inexpensive price of $10 due to the centering issue. You can expect this price to increase, though, since the card is in mint condition. This card is from Ewing’s time with the New York Knicks and is an all-star card from one of his many all-star recognitions. 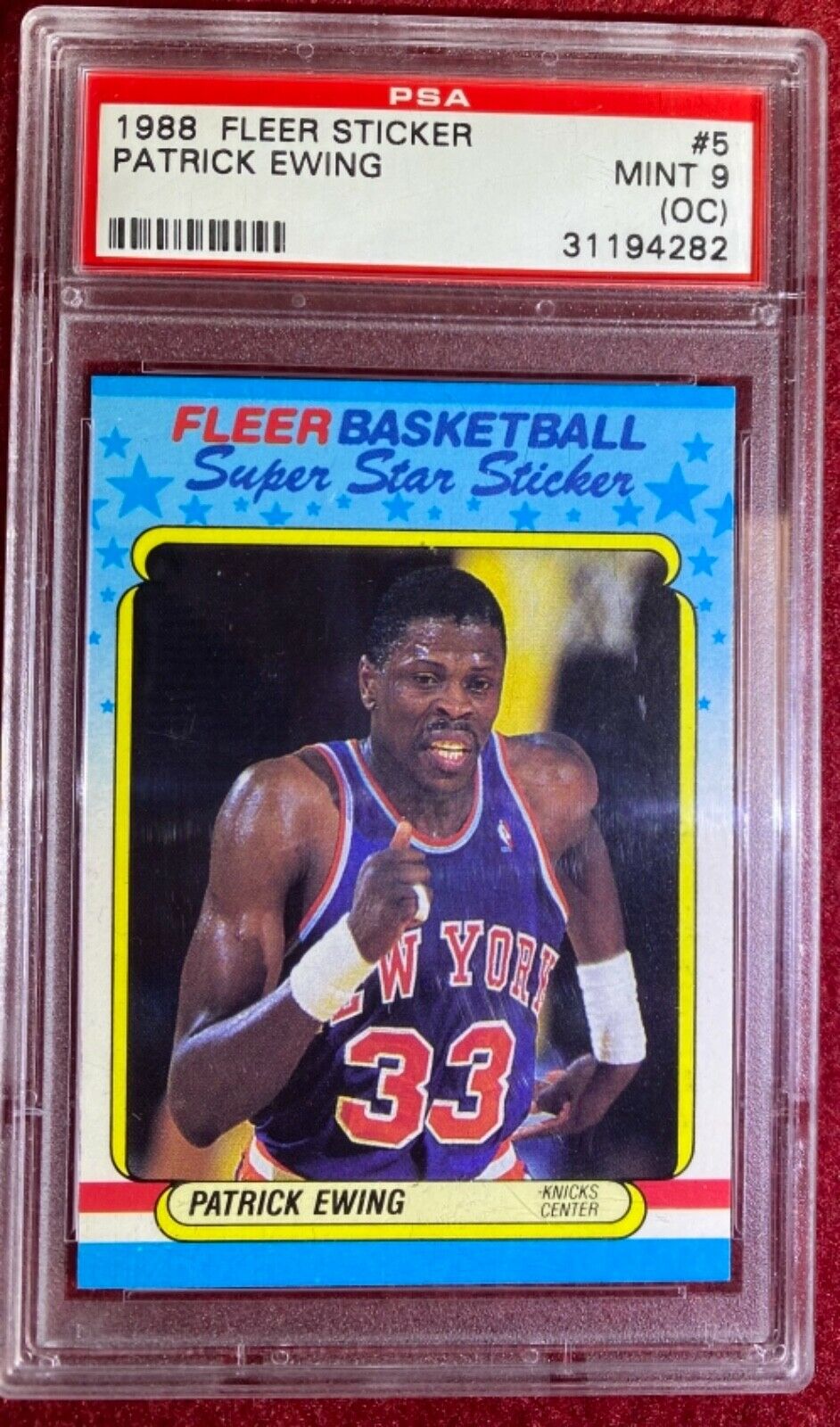 Another Fleer sticker card, you can expect more value from one in GEM MT condition. However, very few–if any–GEM MT 1988 Fleer sticker editions exist for Ewing. However, you can find some in mint condition with a high PSA rating. Even with an adequate condition, this card will cost much less than a GEM MT card. Typically, the Ewing 1988 Fleer Sticker ranges below $100.

As a rookie card, Ewing’s 1990 Skybox #187 card is more expensive than cards from later on in the player’s career. Besides the rookie status, this card has a GEM MT rating of 10, meaning that it’s practically in perfect condition.

Because of this card’s rating and high-quality condition, this card starts bidding at $32. Some people consider this card rarer than the previously mentioned 1986 Fleer Patrick Ewing Card #32. You can expect the price and value of the card to skyrocket in some cases. 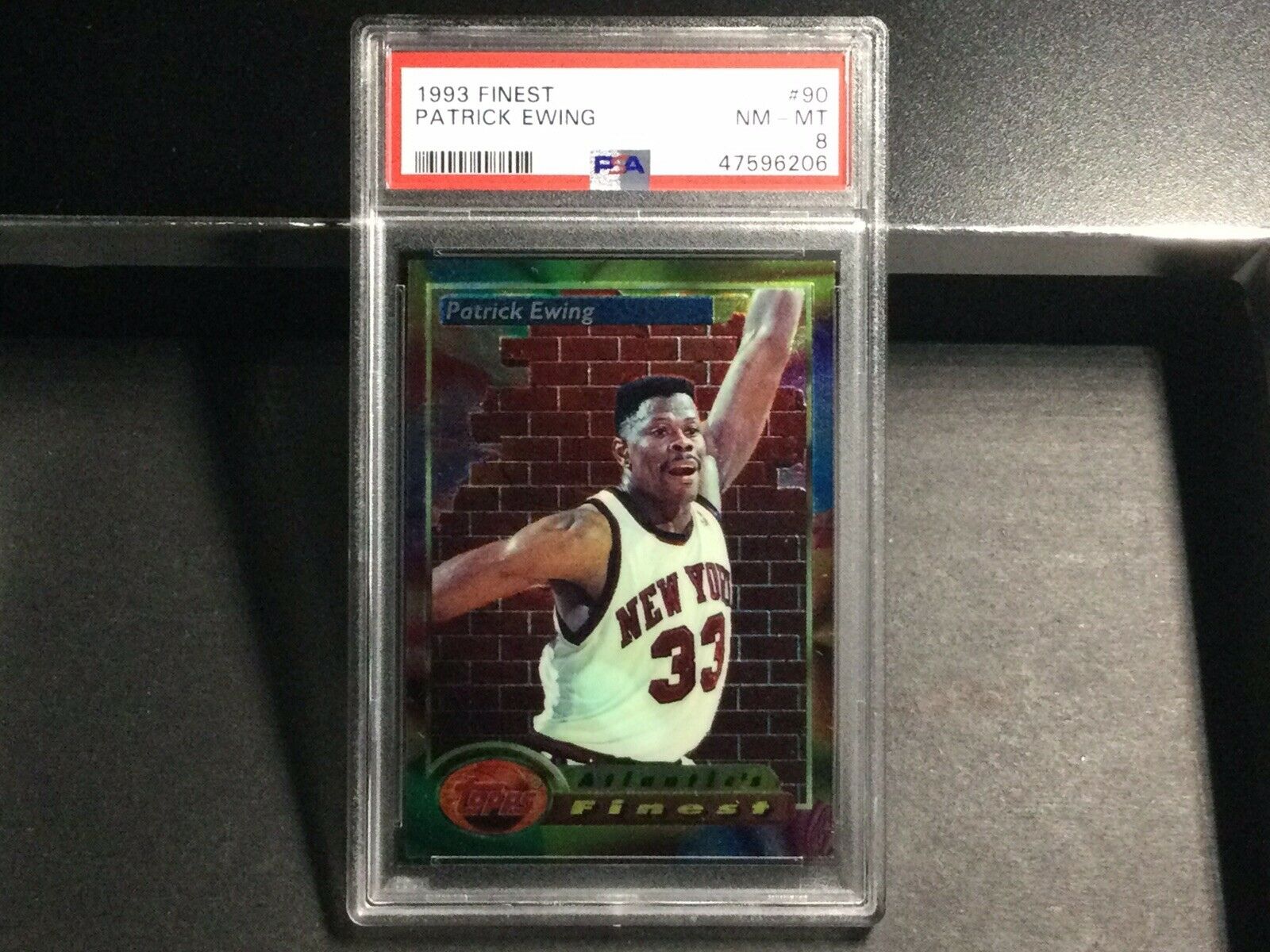 This Ewing basketball card has a very 90s design, posing Ewing against a brick wall with splashes of holographic color. Perhaps because of the odd design or the amount produced, the card is not as valuable as some but will still add to a collection for its uniqueness. The Ewing 1993 Finest card only costs around $20. 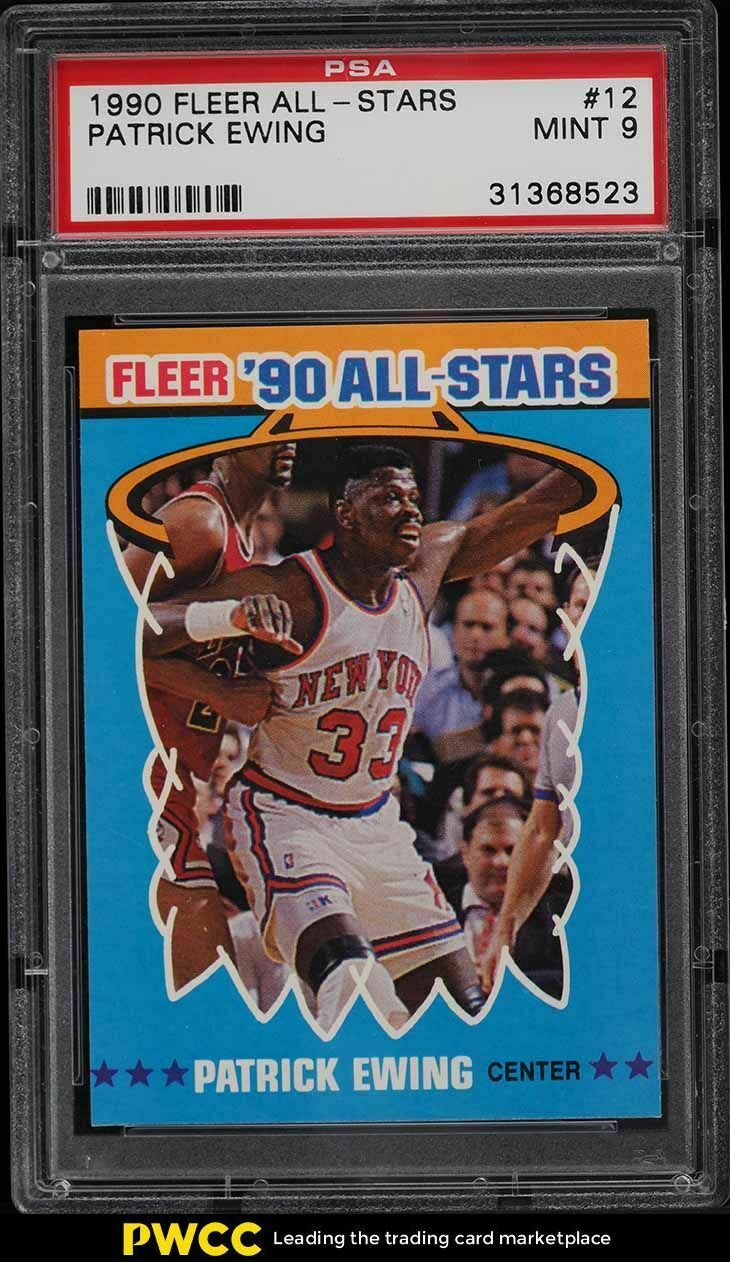 Similar to the 1989 Fleer Patrick Ewing #7, this 1990 edition is from one of Ewing’s all-star recognition seasons, which you’ll note from the Fleer ’90s all-star border. Unlike the previous fleer card, this one has a PSA of 9, making it nearly perfect and pristine.

Even though it has a PSA rating, this card’s bidding starts at an inexpensive $10. The low price is nearly guaranteed to increase as bidding progresses, but you can expect this card to cost much less than the earlier all-star card editions. 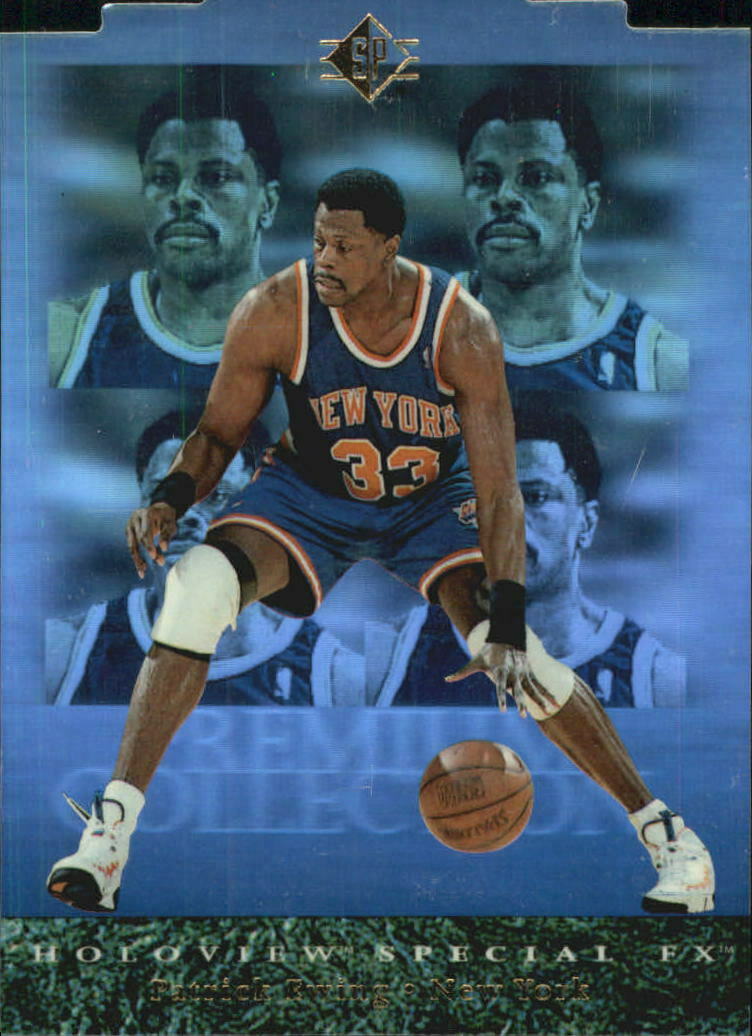 You’d think, as another holographic card, the series would sell for higher than the asking price; but, the Holoview series was not so popular and overproduced. However, since the edition is from later in Ewing’s career and comes in good condition, it will make a nice, complete edition to an Ewing collection. You can find this card for a little over $10 and sometimes below. 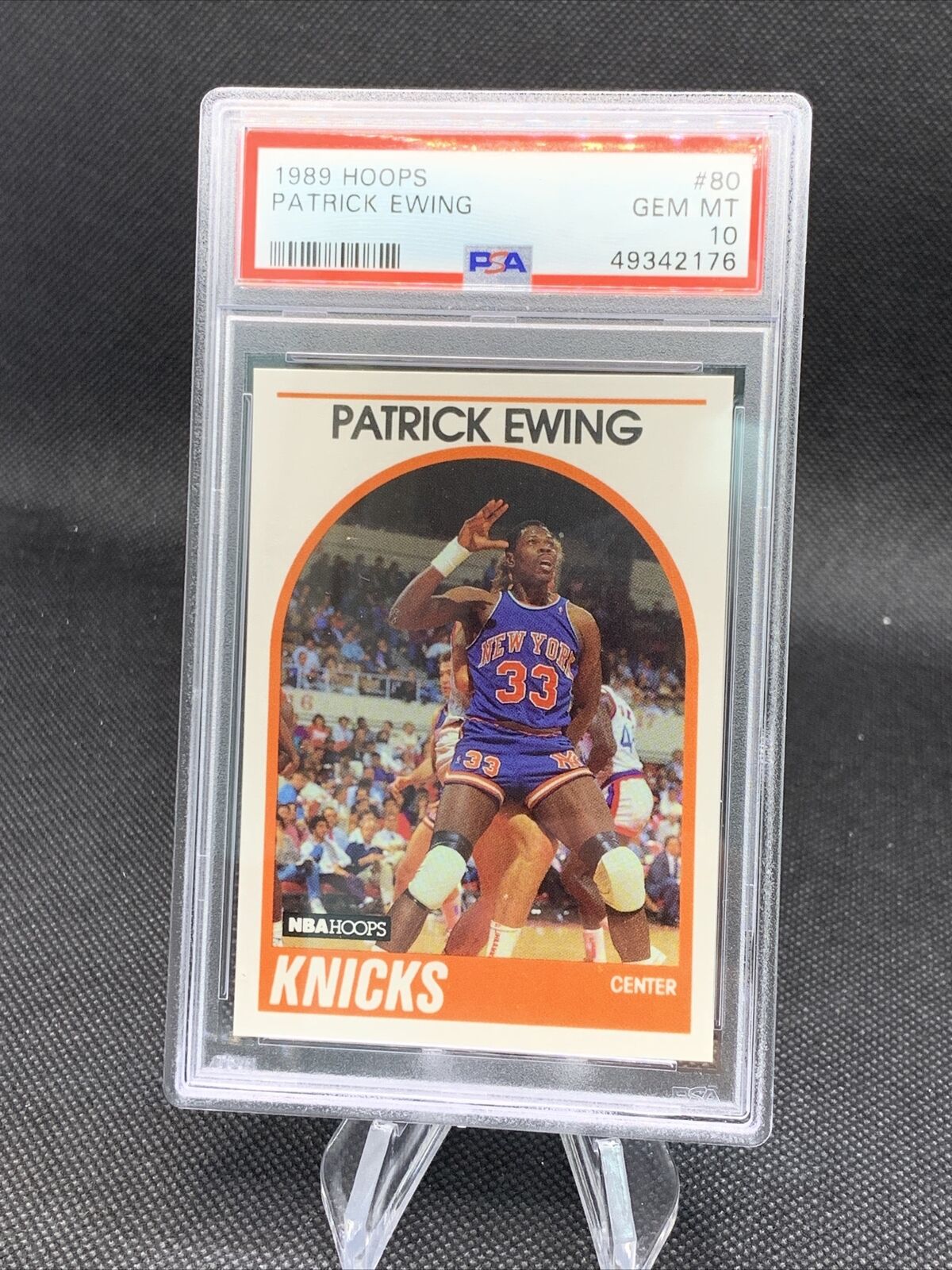 Even though the basketball fans consider the 1989 NBA Hoops basketball cards set over-produced, they helped launch the scene. Because of their popularity and mass production, you can expect all of these editions for all players–except for David Robinson–to have lower prices.

You can purchase Ewing 1989 NBA Hoops card, even in GEM MT condition, for less than $10.

5 Ways To Prepare Your Portfolio For A Recession