If you’re a 90s NBA Basketball fan you may be wondering what the most expensive David Robinson cards are?

Or maybe you’ve been holding onto a few of your old basketball cards in hopes that they’ll be worth thousands of dollars someday? Perhaps you’re looking to purchase a card or set of cards as a keepsake. No matter your situation, basketball cards have been exploding in popularity, attracting new collectors and investors to the hobby.

Who is David Robinson?

David Maurice Robinson was born on August 6th, 1965, in Key West, Florida. He moved all the time due to his father’s Navy career. Eventually, his family settled in Woodbridge, Virginia, and Robinson attended Osbourn Park High School, where he shockingly did not play on the basketball team.

After a serious growth spurt during his senior year of high school, Robinson became a hot commodity in the eyes of the basketball coaches. So, he began playing without any prior experience. After graduation, he followed in his father’s footsteps and attended the U.S. Naval Academy. There, he majored in mathematics and continued playing basketball.

Although Robinson did not see the NBA in his future, he continued to succeed in his basketball career at the Navy. In his junior and senior years, he was named an All-American and earned the Naismith and Wooden Awards, two of the most honorable awards that exist in college basketball.

He was drafted by the San Antonio Spurs in 1987 as a first-round pick and played for them from 1989 through 2003. Standing at 7ft 1in high at 235 pounds, Robinson was a force to be reckoned with on the court. His teammates, coaches, and his dedicated fans called him “The Admiral” due to his service in the U.S. Navy.

He is widely known as the best basketball player to ever come from the Naval Academy and the best center players in NBA history. The Spurs turned a 21-61 season to a 56-26 season filled with victories from the second Robinson joined the team. He averaged 29.8 points per game, 10.7 rebounds, 4.8 assists, and 3.3 blocks in each game.

Robinson earned countless titles and awards throughout his professional basketball career, such as NBA Rookie of the Year,  NBA Defensive Player of the Year, and was part of the All-NBA First Team and All-Defensive NBA First Team four times. He played ten times in the NBA All-Star Games and, in 1995, was crowned NBA Most Valuable Player. In addition, he was a two-time Olympic Gold Medalist and was inducted into the U.S. Olympic Hall of fame two times. Robinson also made his way onto the NBA’s list of 50 Greatest Players.

When it comes to sports card buying and selling, basketball cards are among the most dominant. Within recent years and due to a rising number of fans, basketball has become a card collector’s jackpot. Now, they rank among the world’s highest sales positions. And it’s not just the cards from back in the day that are selling at astronomical prices, but even cards from the last couple of years.

There’s no questioning the fact that David Robinson was a phenomenal player. Although he retired after the 2002-03 season, the cost of his basketball cards proves that he is and always will be an all-star.

Moreover, ‘The Admiral’ was inducted into the Basketball Hall of Fame in 2009, making him a solidified NBA legend.

Collectors and die-hard fans alike can browse through a variety of cards online, especially on eBay, where they sell most frequently.

Here are the 13 most expensive David Robinson cards: 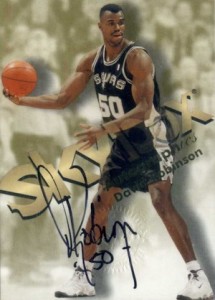 If you happen to have $15,000 lying around (don’t we all?), you can snag this spectacular and authentic Skybox set that’s still safely stored in the original packaging. It features two autographed David Robinson cards from the 1998-99 Spurs season. The set is in excellent condition, which is obviously the reasoning behind the insanely high price tag.

These Skybox autograph editions are definitely the most expensive David Robinson cards out there. 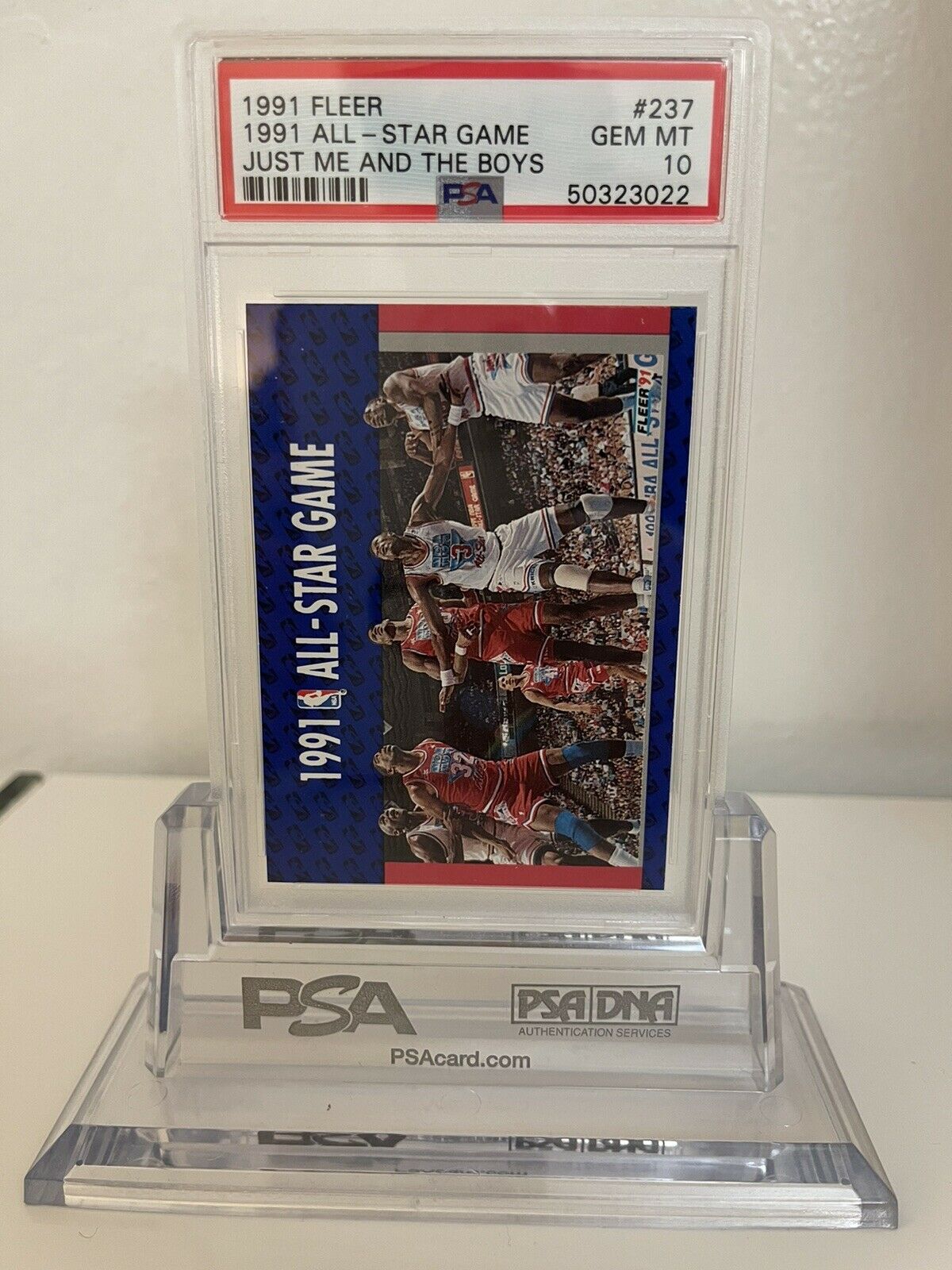 Robinson managed to sneak his way into this one. You get triple the talent in this spectacular, one-of-a-kind basketball card featuring Magic Johnson, Michael Jordan, Kevin Johnson, Patrick Ewing, and of course, the one and only David Robinson. This unique shot is named “Just Me and the Boys.” You can get it for around $5,000 if your budget allows. 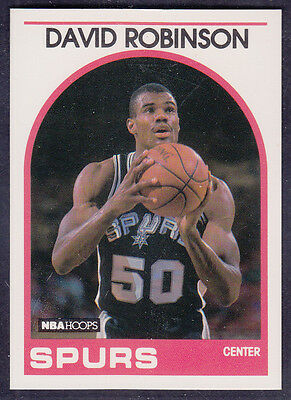 It’s no surprise that a rookie is one of the most expensive David Robinson cards. This iconic Hoops card is from Robinson’s first season playing in the big leagues in 1998-99 after he was finished with his time in the Navy and could join the Spurs.

Robinson quickly led his new team to a significant turnaround and spurred them on to victory, making NBA history with the most remarkable single-season improvement. This particular card is available anywhere between $375 to $4,999 and above. 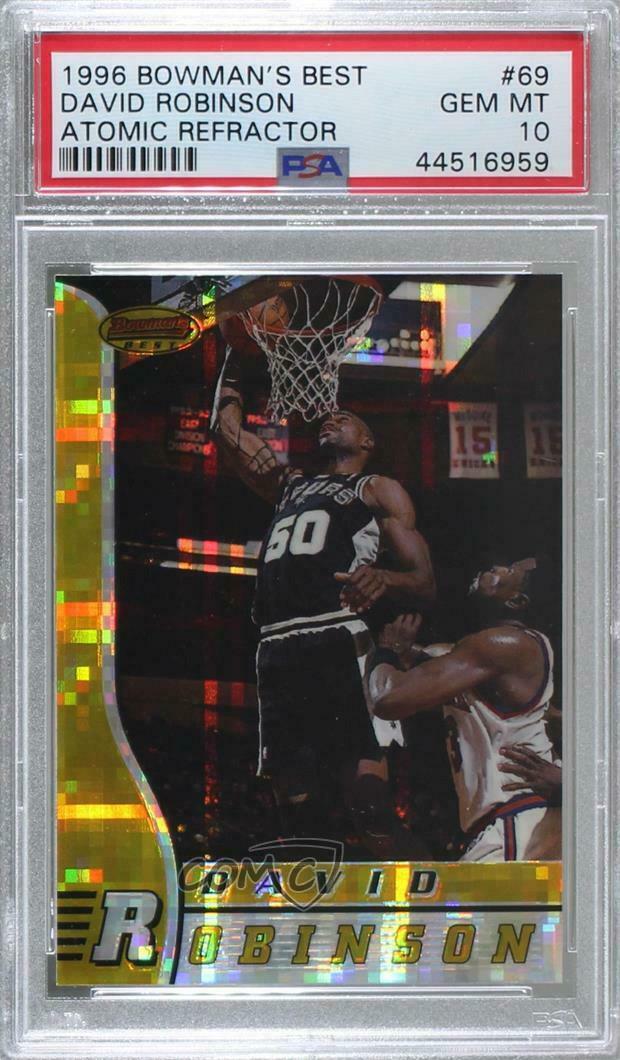 Collectors can pick up this Bowman Best Atomic Refractor card from David Robinson’s 1996-1997 season from around $400 to upwards of $4500. This stellar card features an action shot of Robinson slam-dunking as his opponent looks on. It also features a player profile, including size, position, and game statistics.

This Panini Prizm Silver Refractor card is the most modern card included in this list, created in 2013. It comes in at around $2000 with untouched packaging and a sleek front and back design. The image features Robinson in full attack mode, positioned to make a power move to the hoop and help lead the Spurs to yet another victory. While the back gives a summary of the basketball phenomenon’s life and his journey to the top. 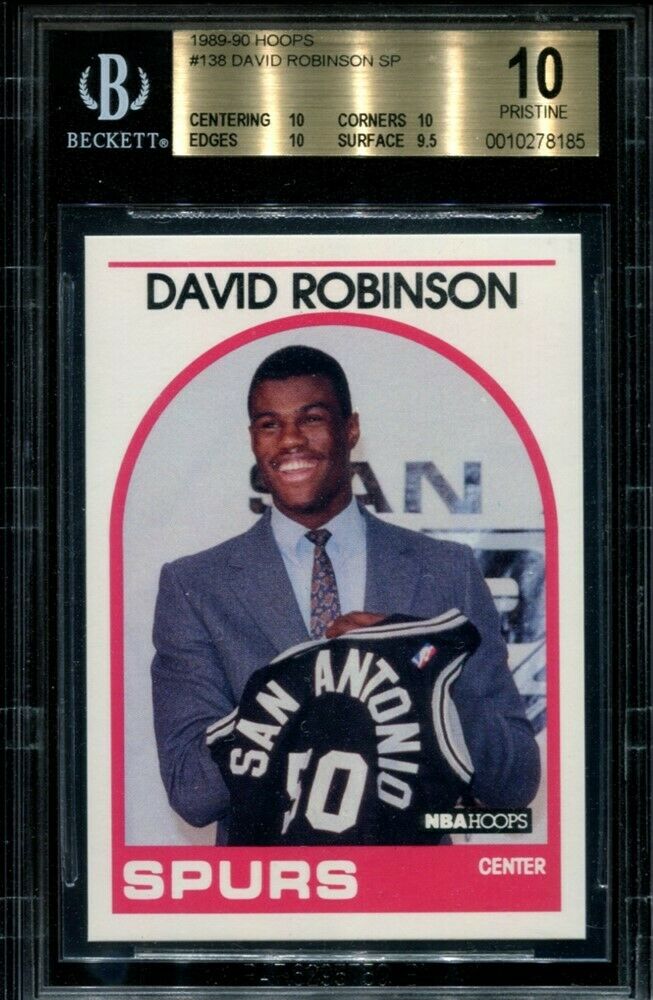 This pristine 1989 Hoops card is the rarest as they come. It’s viewed as Robinson’s trademark card, as he was among the first players to be featured on a card while in his rookie season with the San Antonio Spurs. The picture shows Robinson smiling and holding up his #50 Spurs Jersey after being drafted as a #1 pick. The card’s price ranges from around $500 to $1600. 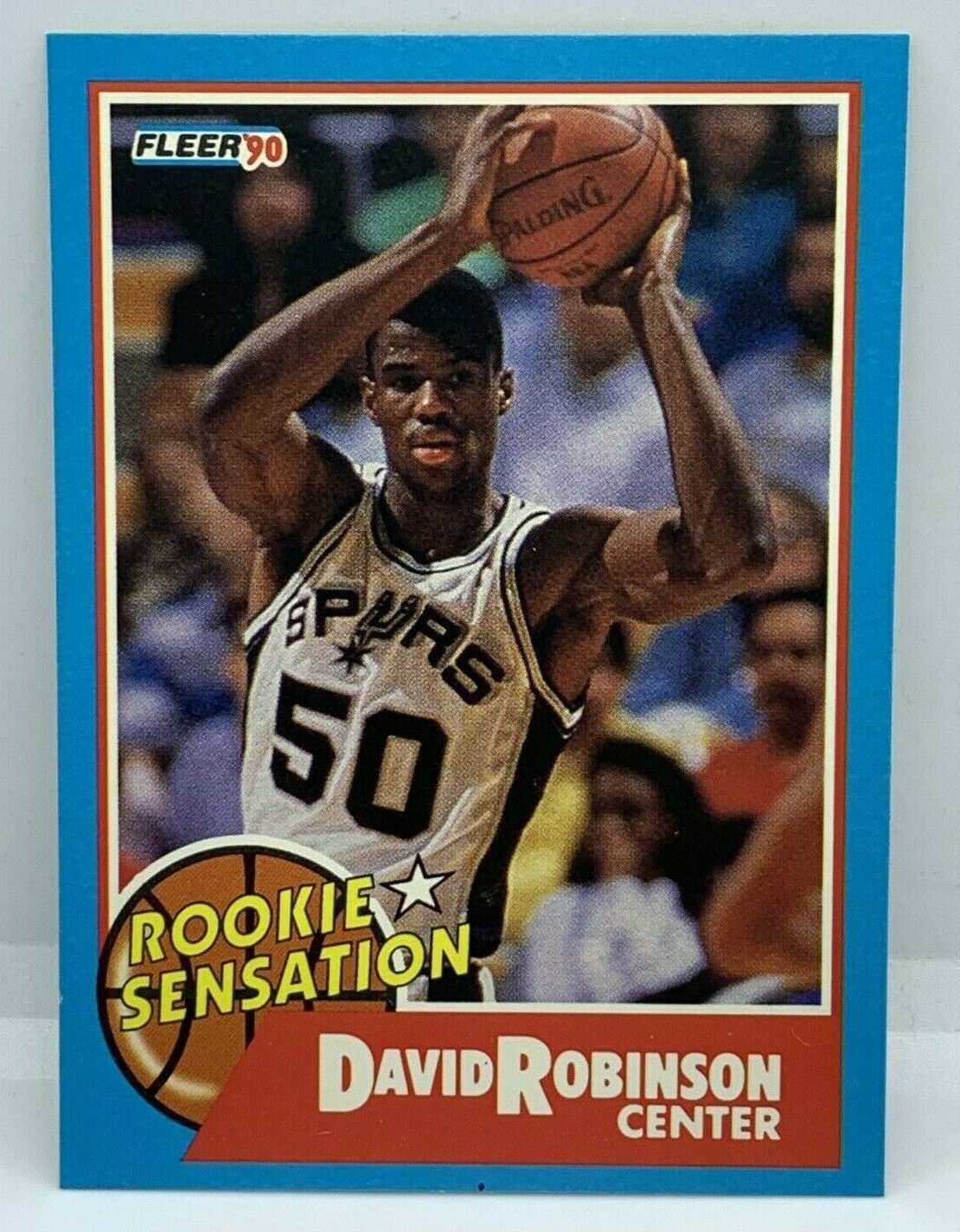 It doesn’t get any better than a PSA 10 Rookie Sensation card, and this one surely delivers. The bright colors and sweet image of Robinson preparing to make a pass is a sight to see. It also includes an in-depth biography on the back for collectors and fans to enjoy. The card goes anywhere from $200 to around $1600. 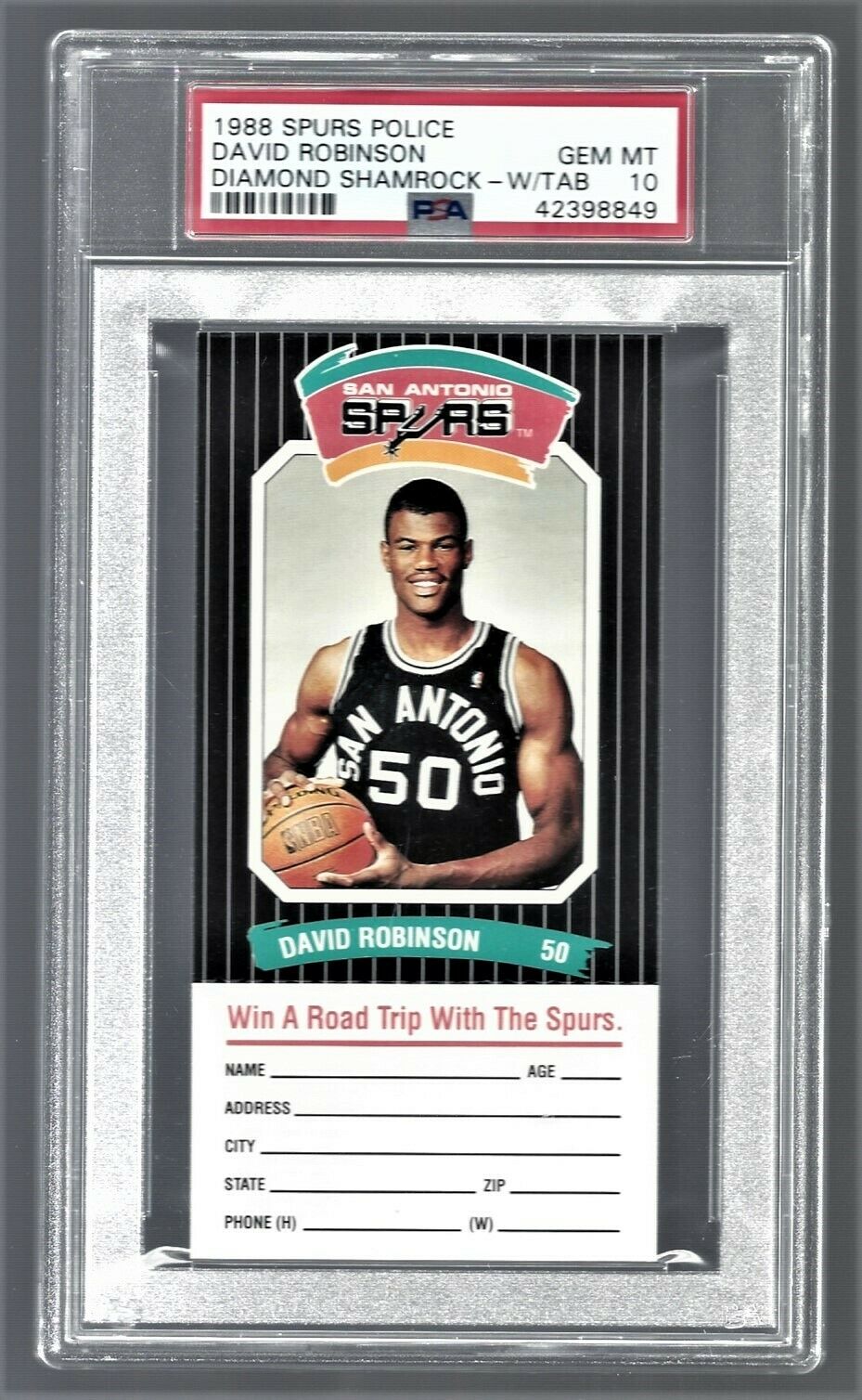 This is one of Robinson’s earliest basketball cards and was given to fans and collectors as an early giveaway during the 1989-90 season. The San Antonio Police distributed the cards in a campaign to encourage the public to say no to drugs. The front displays a picture of Robinson along with a form where people could enter to win a road trip with the Spurs. You can get it brand new for around $1000. 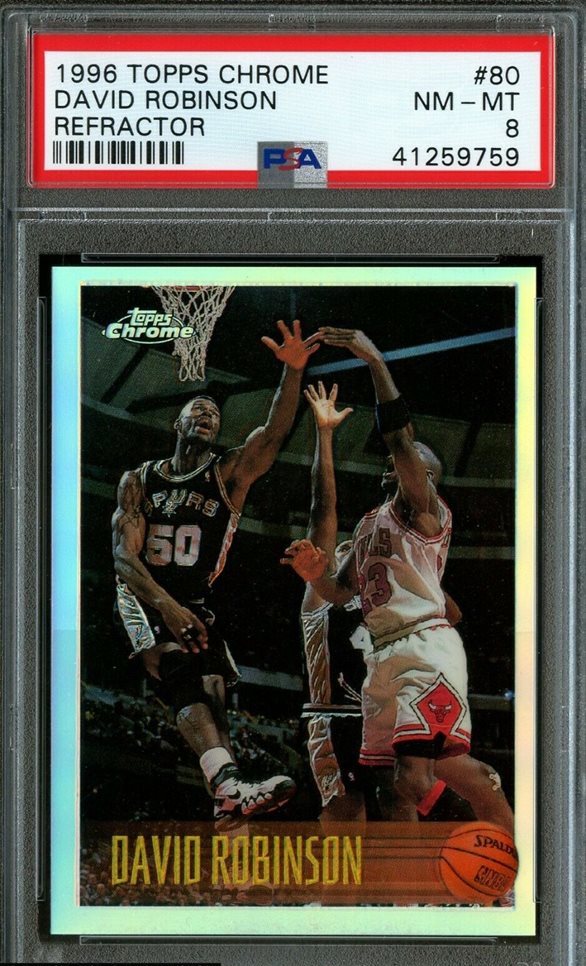 The Topps Chrome Refractor is an iconic basketball card. After all, who gets the chance to watch the Admiral try to block MJ? The answer is you if you buy this card! However, it’ll cost you between $225 and $1000. You can also check out the back for a deep dive into Robinson’s incredible career. 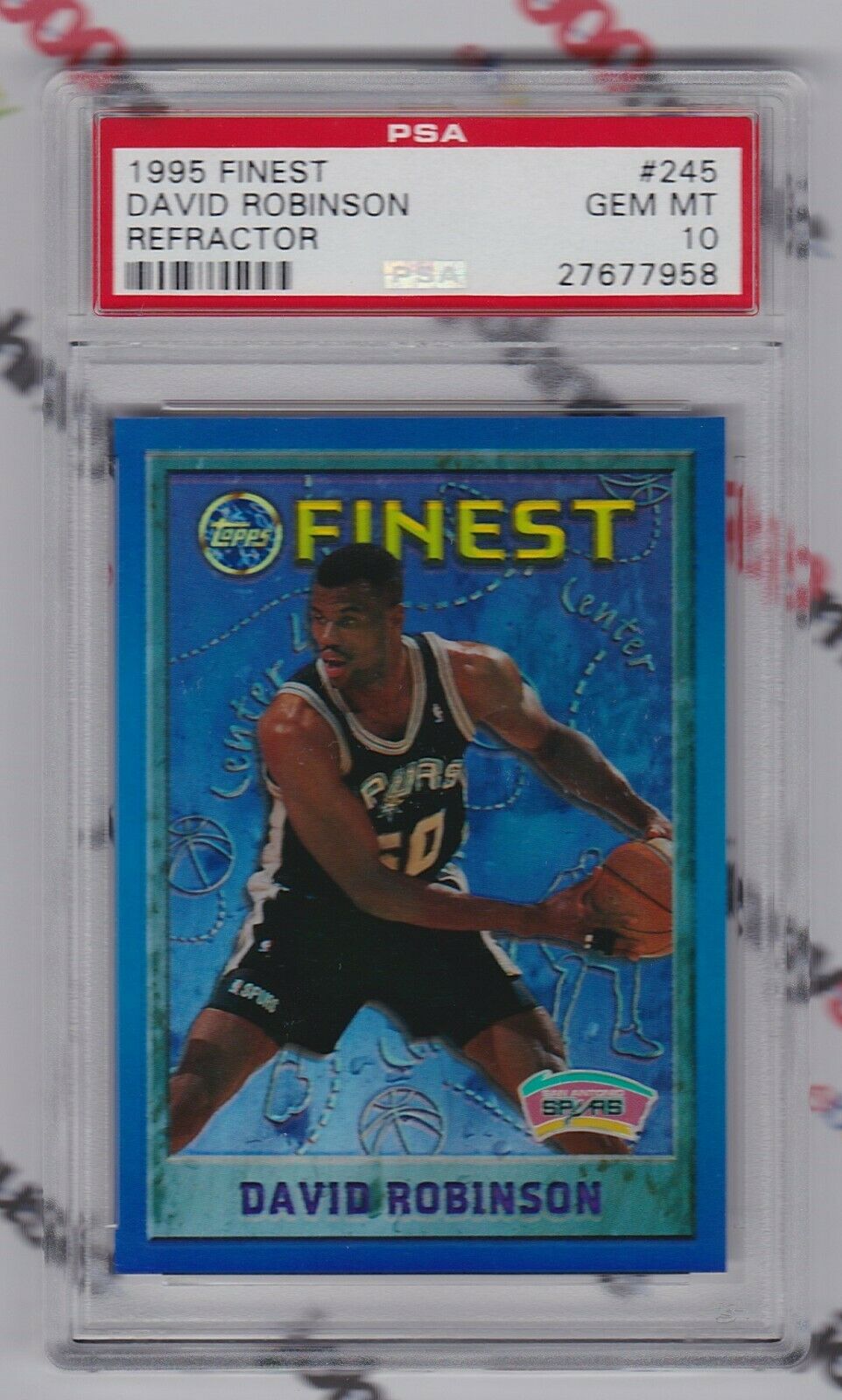 For around $760, you can purchase the Topps Finest Refractor card that features Robinson in his This ones from 1995, which is the same year Robinson earned the Most Valuable Player award. 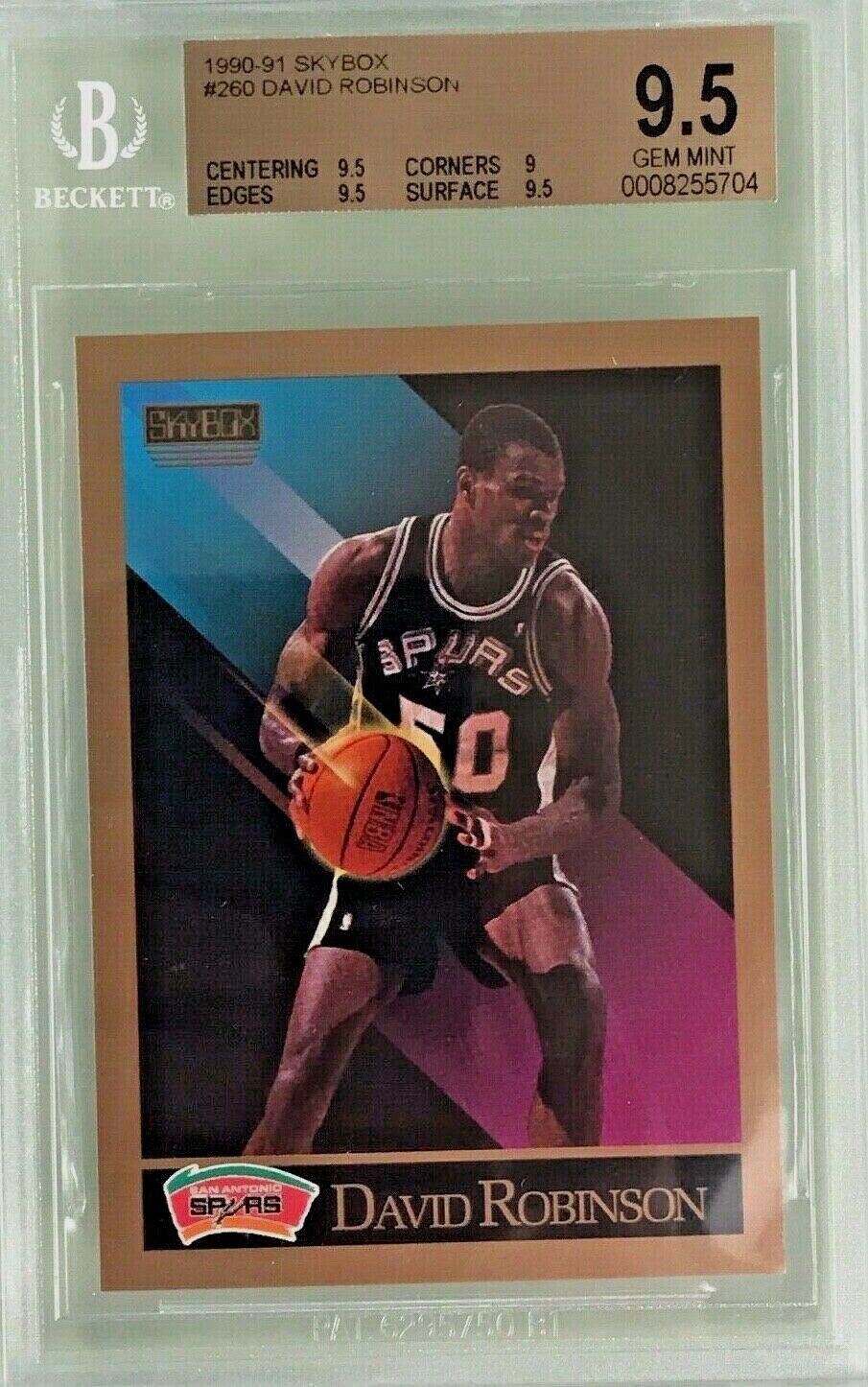 Here’s another beautiful card from Skybox from the early years of Robinson’s NBA career. View impressive stats on the back along with a picture of a grinning Robinson. On the front, you’ll find him gripping the rock, preparing to blow past his defender and take it to the bucket. You can buy this card for $300 to $600 online. 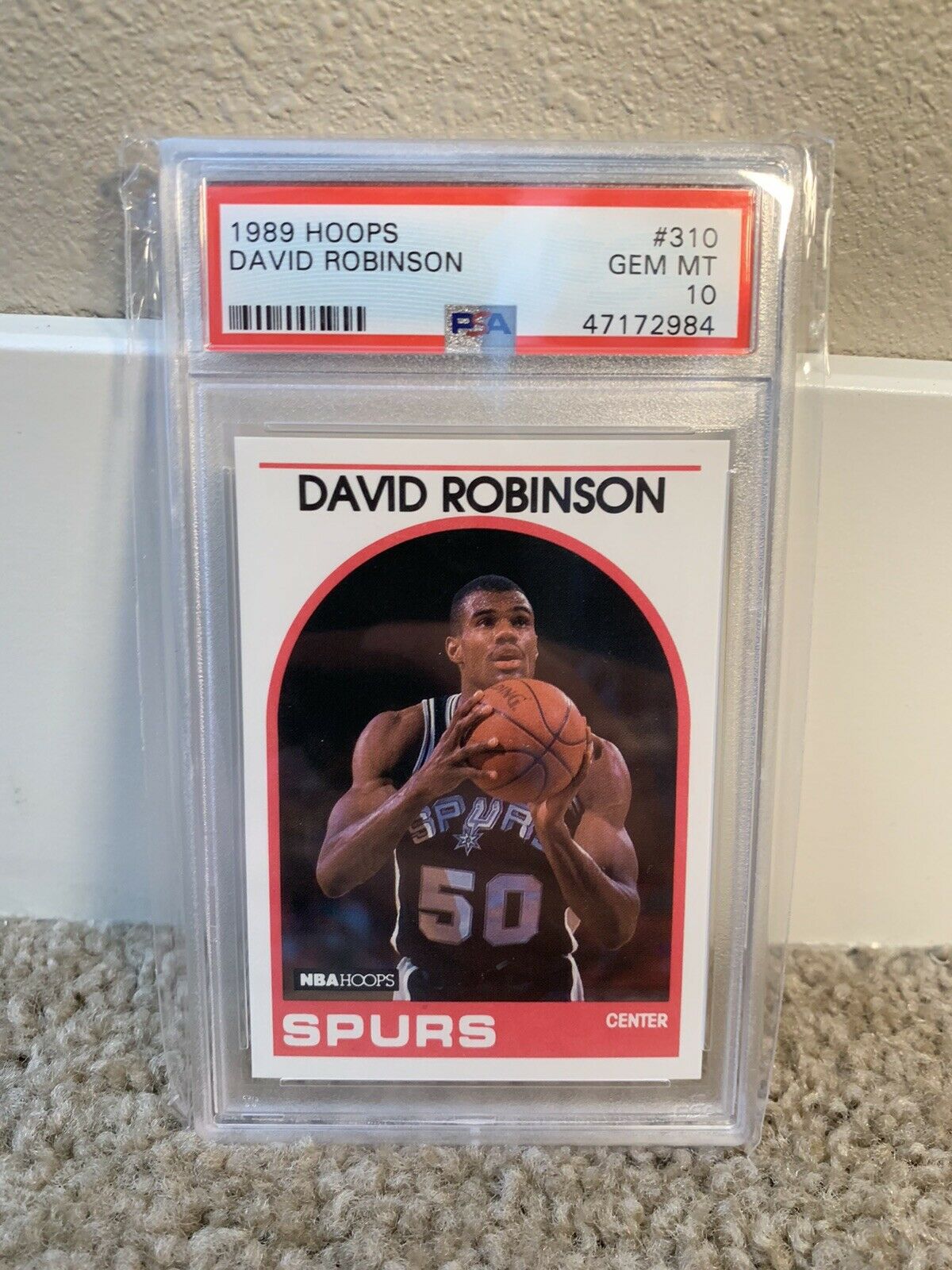 He shoots, and he scores! This card features Robinson, who appears to be getting ready to drain a free throw during one of his first games playing with the pros in the NBA. You can purchase this authentic NBA Hoops Rookie card for around $240 to $450, depending on what you stumble across online. 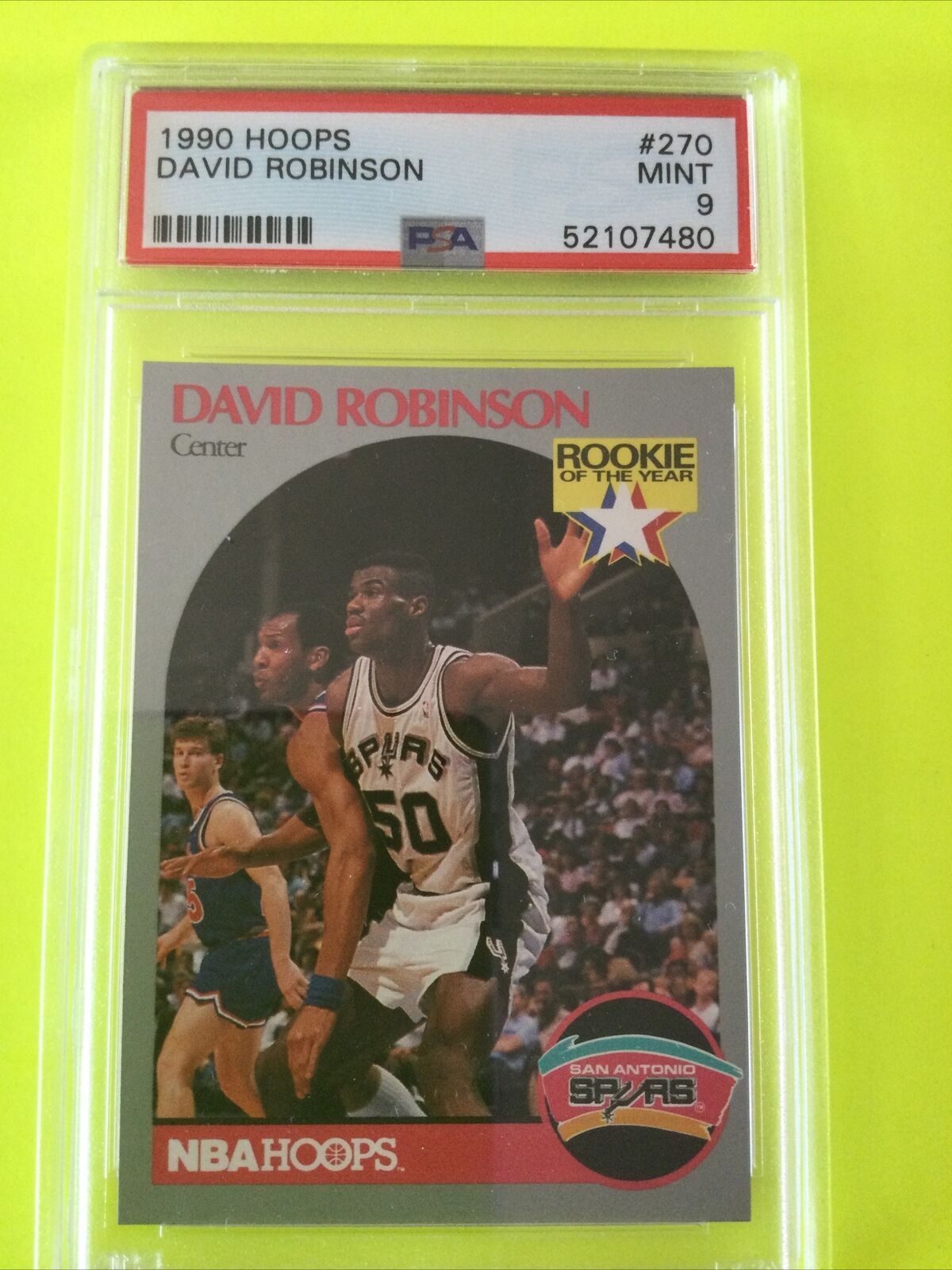 Robinson earned Rookie of the Year during his first season, and rightfully so. You can buy this card in brand new condition for around $300 or so and enjoy gazing upon Robinson’s powerful post-up. The card also allows you the opportunity to review his spectacular game stats during his time in the U.S. Navy.

5 Ways To Prepare Your Portfolio For A Recession

The Market Impact Of The Coronavirus On Traders Vs. Investors