The most expensive vodkas vary from diamond-studded bottles to complete crystal capsules marking a historic event or milestone.

There’s a certain mystique associated with vodka. Whether it’s James Bond asking for his martini to be “shaken, not stirred,” or the memorable scene of General George S. Patton downing vodka shots with his Russian counterpart following the war, the colorless, odorless liquid is enough to light a fire in the coldest of hearts.

Typically thought of as a Russian invention, vodka may actually have been developed in one of the Balkan states, in Poland or even in Sweden. The name itself is derived from the Slavic term for water, Voda. It has been a known presence since the early 1400s, but its roots probably extend back centuries earlier in a crude form. Originally used medicinally like many other spirits, it has proven benefits for toothache as well as preventing the itch of poison ivy.

The word vodka itself first appeared as the Polish “wodka“ and referred to medicines and cosmetic products, while the drink was termed “gorzałka,” a derivative of the Polish word meaning “to burn.”

Vodka’s reputation for being flavorless stems from the fact that most vodka is distilled three times and also filtered through charcoal that removes not only impurities but also leftover hints of flavor. True aficionados can, however, discern differing flavor notes, sweetness, or fragrance in prized vodkas. Original medicinal vodka had a much lower alcohol content, a maximum of perhaps 14 percent. The stills that increased the purity and boosted alcohol content were invented in the 8th Century.

Today, vodkas normally have an alcohol content of at least 40%, and some are much higher. Pure grain alcohol is sometimes available to consumers — Everclear is one example — but such spirit has not been subjected to the filtration and refining required to be a true vodka. One extremely high-alcohol content Bulgarian vodka is sold at 88% ABV, but water is typically added to the distilled rectified spirit or ethyl alcohol prior to its bottling with a vodka label.

Vodka may be distilled from any grain, grape, or high-starch or sugar plant, even simple sugar and water alone. Although many believe that “true” vodka is made from potatoes, that is a misconception. Potatoes became dominant for Swedish vodka in the 19th Century, and they are now used widely by producers. Today’s most popular vodkas are grain-based, commonly sorghum, corn, rye, or wheat. Other common vodkas are produced from molasses, soybeans, sugar beets, or rice. Highly prized sipping vodkas are typically distilled from winter wheat.

A Reputation for Versatility

Vodka is relatively easy to produce and extremely versatile. It can be consumed neat, served on the rocks or with a splash of tonic, or mixed with a wide variety of fruit juices, mixers, or other spirits. It is favored for fruity cocktails, but it is also considered a real “man’s drink” in certain circles and is often consumed as a single shot, with small bites of food on the side. Women tend to sip their vodka, and drinks such as the Martini, Cosmopolitan, Screwdriver, Bloody Mary, Moscow Mule, and Harvey Wallbanger have been popularized in movies and literature.

A relatively new phenomenon is the variety of infused vodkas now available. Perhaps those who imbibe actually want some flavor and scent in their liquor after all? Or is it just a passing fad? For those who wish to try something new, vodka is now widely available with flavorings of various berries, lemon, peach, or cinnamon apple. If you’re looking for something truly unusual, there is a vodka infused with bacon. A recipe even exists for the “Bacon Me Angry Cocktail,” combining bacon-infused vodka with hard cider and maple syrup!

Vodka is available in a wide range of prices and is produced in a lot of nations around the globe. Most vodka drinkers have their favorites. But some of the most expensive vodkas are reserved for true collectors — many collectors may never sample the fiery liquid contained in the bottles they collect, although they may collect designer edition bottles from favorite vodka distillers.

Here’s a list of the 14 most expensive vodkas ever produced: 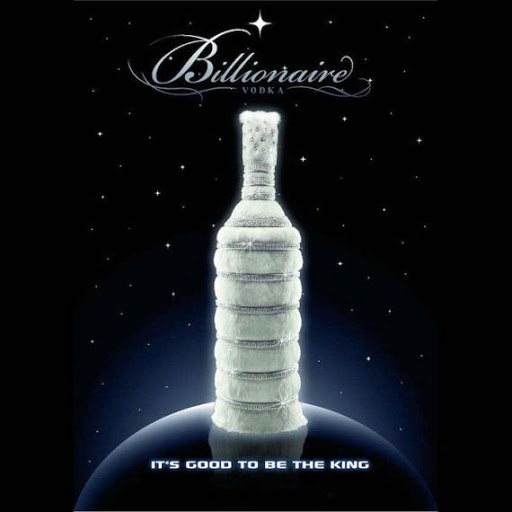 It’s all about the packaging, and the mystique of a black faux-fur-clothed bottle that totally hides the contents and is further embellished with nearly 2,000 diamonds in gold settings. The 2015 edition, a sellout, built on a tradition of expensive bottles begun by Leon Verres’ Billionaire Vodka in 2012. The vodka it holds was also filtered through real diamonds. This particular offering was an 18-liter bottle, but a smaller, less expensive 0.7-liter bottle Diamond Edition was also available for a much lower price. It had six diamonds and a golden dog tag. In addition, a connoisseur may purchase the same vodka in a simple bottle for a much more reasonable price!

This puts Billionaire 2015 Edition first on our most expensive vodkas list.

2. The Eye of the Dragon 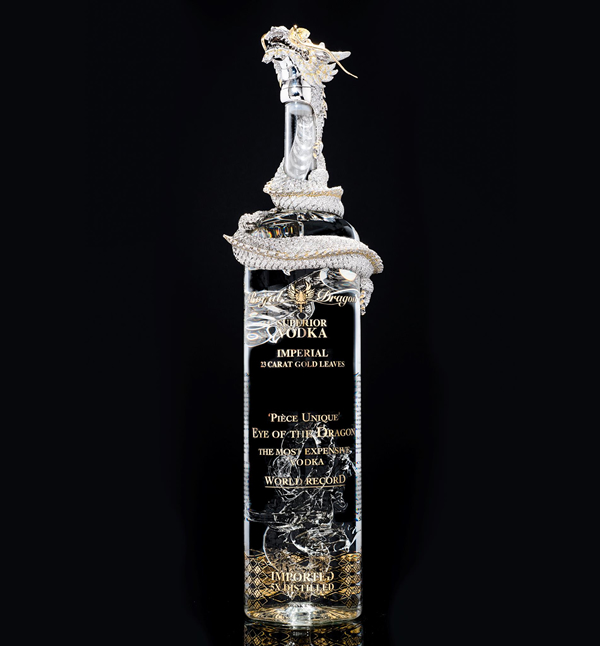 Royal Dragon Vodka, a Dutch company based in Hong Kong, created a beautiful bottle topped by a stylized dragon studded with 50 karats worth of yellow diamonds in addition to approximately 15,000 clear cut diamonds and solid 18-karat gold. The artistic creation was a joint effort between Scarselli Diamonds of New York and the vodka company. It reportedly took eight months to produce, and the vodka it contains is also said to be of legendary quality, produced from winter rye charcoal-distilled five times.

The triple-filtered fiery liquid contained in this diamond-studded white faux-fur bottle was filtered once through ice, then a second time through Nordic charcoal, and finally through crushed diamonds and other gemstones. The first of this producer’s legendary expensive bottles, it is another authentic vodka that may never be tasted. But the five-liter bottle recalls an era of Russian overindulgence and it is indeed beautiful to gaze upon! 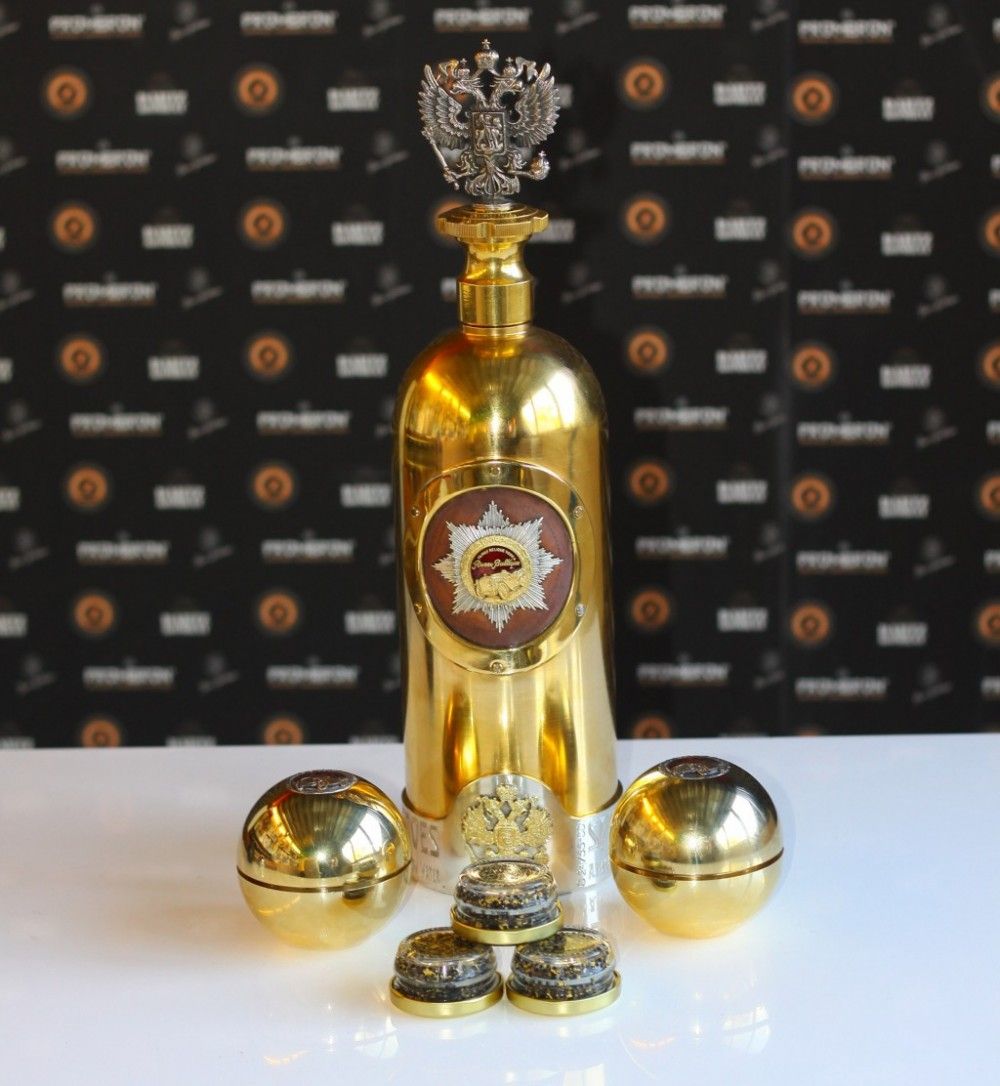 It’s a unique bottle, to say the least, and there is a unique story that surrounds it. Made to celebrate the 100th anniversary of the automaker, it is of bulletproof glass, with a flask made from the radiator guard of a vintage Russo-Baltique automobile. The first bottle was presented to Prince Albert of Monaco. One of the bottles was stolen from a vodka museum in Copenhagen.

Captured on film by the security system, the empty bottle was later recovered from a  construction site and returned to the museum. Later it was refilled with vodka, and it retains its worth. After all, it’s all about the packaging — and the story. Right? 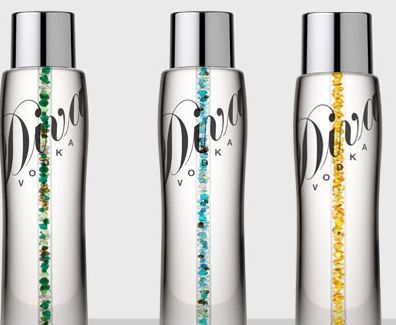 This is a bottle of vodka meant to be consumed, but there is a special reason for that. The vodka itself is said to be extraordinary, triple-filtered, and known for its premium taste. There are also precious crystals encased in the bottle that can be used as gifts to special people for special occasions, or the bottle may simply be displayed as an art piece when it is empty. It’s definitely that pretty! 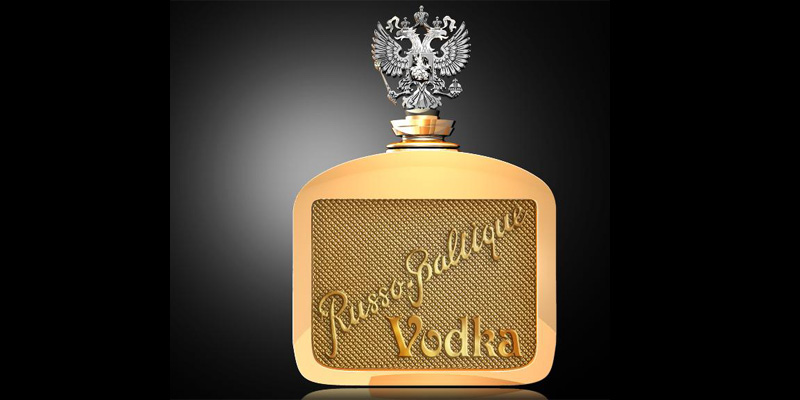 Whether you love the cars or you love the vodka, you’ll have to admit there’s something special about both. And the combination can be tantalizing. The renowned Russian maker of luxury cars from the 1900s turned its attention to vodka later in its history, and achieved success there as well. Only 10 bottles of this vodka were released, and each buyer received a complementary Dartz Prombron Iron Diamond SUV. The flasks that encased the bottles were solid-gold replicas of the car’s radiator glass and weighed 20 pounds each. Caps are made of yellow and white gold, topped by a diamond-studded Russian imperial eagle. 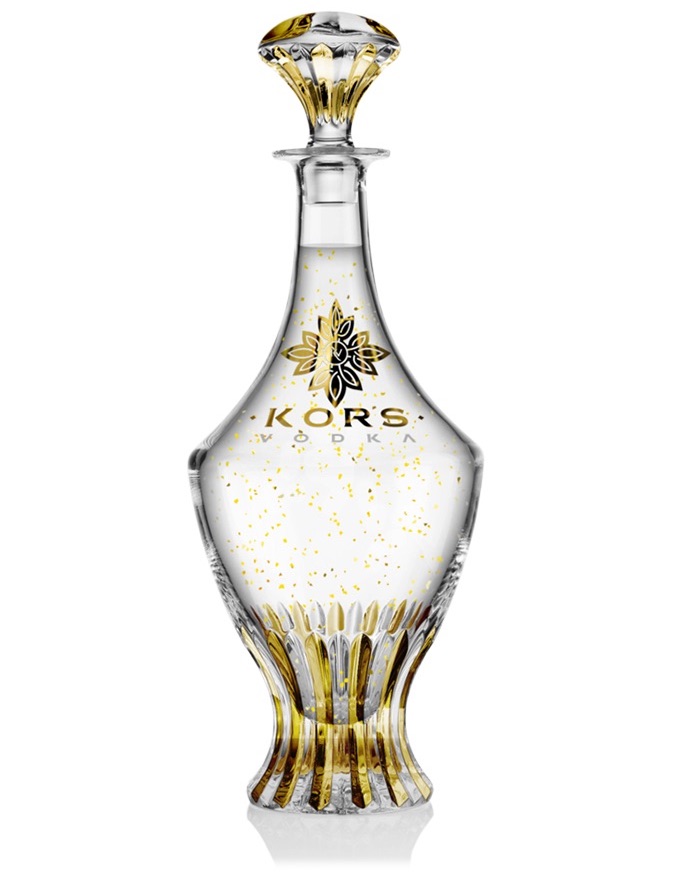 Russian Czar Nicholas II in the early 1900s was determined to create the “perfect” vodka, and he attempted it by distilling with solid gold pipes and infusing the liquid with diamonds. He then shared his recipe with his cousin, George V. Kors. This distinctive vodka is the result, and only 240 bottles were released. Some are still around, but you’ll pay dearly for it! 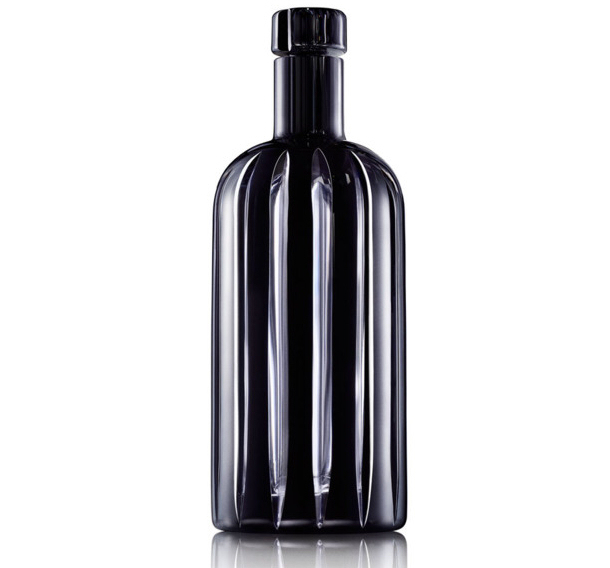 It’s a complete package: A simple bottle fashioned from high-quality crystal made at Sweden’s Reijmyre Glassworks, along with two appropriate matching crystal tumblers, and packaged in a treasure chest of distinctive pinstripe fabric. The design was created by Magnus Skosberg and Mimi Smart, and only 10 sets were produced. Absolut continues to produce premium vodka, distilled from hard winter wheat. It also markets a range of infused vodkas to appeal to a wide variety of tastes. 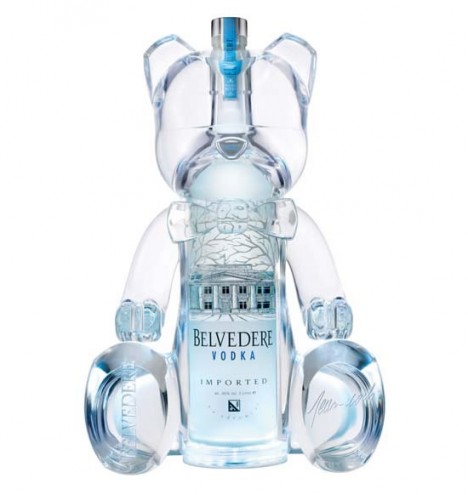 It’s hard not to smile at these little bottles that look like bears! Originally displayed at the 2011 Cannes Film Festival, the bottle was a limited edition that resulted from a collaboration between the Polish company Belvedere and singer-songwriter DJ Jean-Roch. The vodka itself is distilled four times, making it as unique as the plexiglass, backlighted bottle which is an attention-getter of a totally different kind. 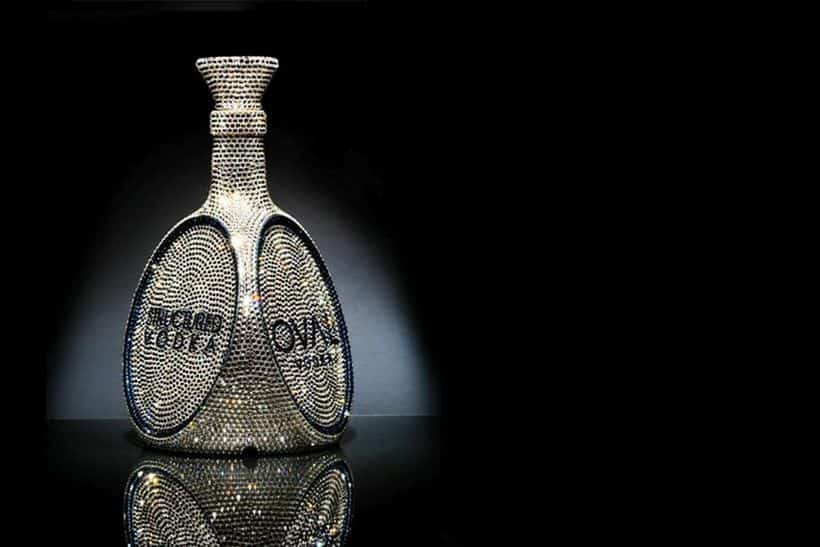 Launched in 2009, Oval Vodka is produced in Vienna, Austria, and served only in exclusive nightclubs in Europe and America. The exclusive vodka, produced from 100 percent pure wheat through a patented process, is bottled at 84 proof, making it an exclusive variety. The bottle is unique as well, studded with Swarovski crystals that catch and reflect light from every direction. 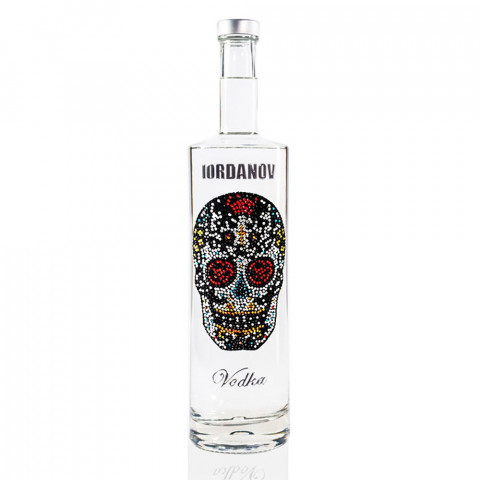 Produced in Koblenz, Germany, Iordanov Vodka is produced with 100 percent pure wheat and water from the Vogelsberg Highlands. The elixir is distilled five times and is known for its rich flavor and aromatic scent. Its unique bottle is studded with 14,000 Swarovski crystals, making it as memorable as the vodka contained within.

Only 300 bottles of this Stoli limited edition vodka are released annually, and each classic hand-blown bottle is packaged with a gold-plated ice-pick as a gift. The vodka is unique as well, produced from Russian wheat and Himalayan mountain underground spring water. 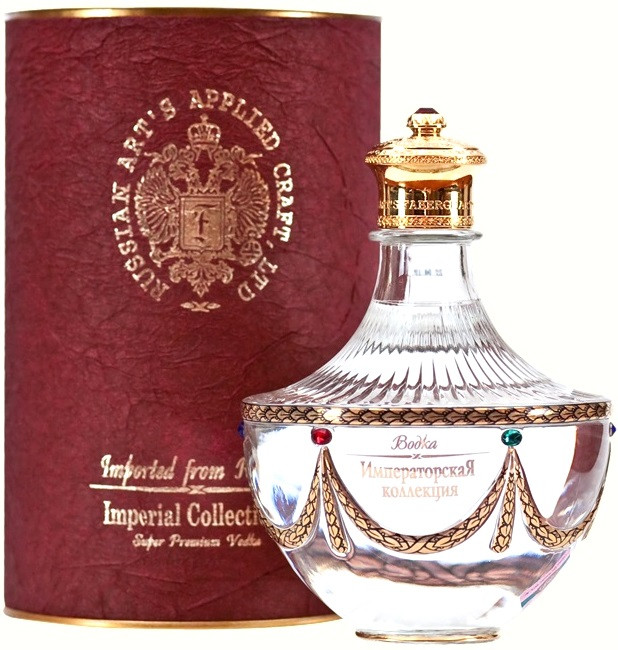 This one boasts some unique packaging. Each white enamel flask is adorned with gold and crystals. Then, they are encased in a Faberge egg topped with a golden eagle for its presentation to customers. Even the simple red box that contains the flask is worthy of note.

Last on our most expensive vodkas list is a visual stunner by Alize.

A special release for Valentine’s day in 2007, this bottle of vodka is surrounded by Swarovski crystals. It has a nice blend of fruits and will certainly get her attention. If you’re into bedazzled vodkas, this one’s for you!

The least expensive vodka on this list may still seem extremely high for a bottle of alcohol destined to be consumed, but some of the vodka in these bottles may never be tasted at all. If that seems a bit odd, simply remember that is one of the most mysterious aspects of prized bottles of any type of liquor. On occasion, though, we hear of a decades-old bottle of vintage wine uncorked to celebrate an anniversary, or a centuries-old bottle of brandy opened to mark a special event.

That, in itself, is cause for celebration!

Whatever the motivation for buying one of these bottles, they are not only beautiful examples of creative artistry and craftsmanship, but also testimony to the expertise and taste of the distillers, the business acumen of the producers, and the joy that such beverages can bring to life.

14 Most Expensive Brandies In The World