The most expensive harmonicas cost thousands and even tens of thousands of dollars, which is hard to imagine for such a tiny instrument.

Not too long ago, you could buy a brand new 10-hole harmonica for about $20. Today, however, companies have put more into their production and improved upon the simplistic design of harmonicas, creating high-end selections for serious musicians.

The harmonica dates back to 3000 B.C. when a Chinese instrument called the sheng was developed. As you can imagine, we’ve come a long way from this design. It places harmonicas as even older artifacts than flutes. The way that harmonicas are developed now includes intricate working parts that supersede anything that could have existed during that time, so they take longer to master than many other instruments.

Quality harmonicas stand the test of time and only increase value (especially when Bob Dylan signs them). From expensive materials used to create the casing or artisan reeds that you can’t find anywhere else, you’ll quickly see just what an expensive harmonica is worth.

Let’s take a look at the 10 most expensive harmonicas in the world: 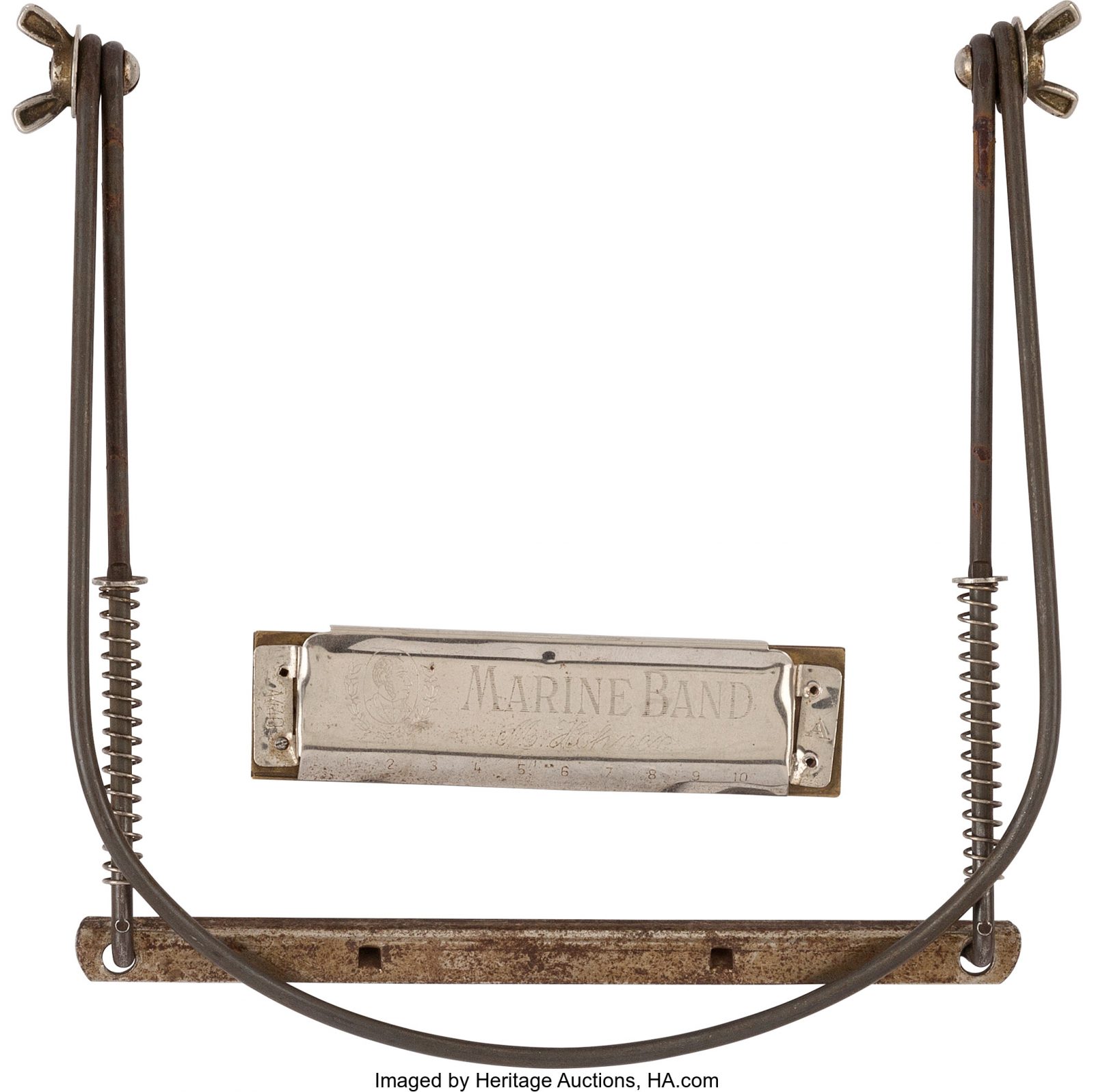 Who doesn’t know (and love) Bob Dylan? His Marine Band set, developed by Hohner, went up for auction at a whopping $13,750 because it came with a note that proved its authenticity. It also included the metal and wooden neck stand, complete with shock springs and the actual lanyard. Proof for authenticity was provided in the form of a note which was included with the harmonica, which read, “These are for you. They’re a bit worn, but still good! Bob.”

The awesome thing about this harmonica is that it dates back to Dylan’s use until 1961, and it’s believed to be the harmonica he used to record for Harry Belafonte’s 1960 album, where Bob Dylan performed. It’s funny seeing how little he was paid back then compared to what his net worth became, and it all started on the harmonica.

At over $13,000, this Bob Dylan collectible is the most expensive harmonica in the world.

Tombo was first established in 1917 in Japan, and they’ve been making fantastic harmonicas ever since. G sharp harmonicas aren’t nearly as popular as C flats, which is what makes this even more unique.

Tombo’s extreme attention to detail, where they also produce Lee Oskar harmonicas with their same great level of quality control. Most of what makes these so expensive is the cost of materials and making it a G sharp harmonica. Many harmonica makers avoid G sharp, which makes these harder to find (and drives the cost up).

The difference between standard harmonicas and those designed for orchestral purposes comes down to the number of reeds. Hohner included a whopping 48 reeds in here, and in your standard inexpensive harmonica, you’ll either have 10 or 20 (if it’s a ten-hole model).

Hohner is already known as one of the top harmonica manufacturers. Still, they go above and beyond with brass plating, nickel plating, and an actual sterling silver comb and cover. It’s about as regal as you can get while still being functional. This is designed for the concert soloist, who has a set of pipes that they can work on all 48 reeds.

It’s not just about the type of harmonica, but its age and lineage. Suzuki is one of the biggest manufacturers of harmonicas in the United States, and they’re known for making some extremely high-quality harmonicas. The strange thing is, their M20 Manji lineup is still in production and isn’t that expensive.

This is one of those rare finds that you don’t see too many of. It’s all about the year rather than the function and is certainly designed towards collectors. Suzuki still makes 10-hole harmonicas just like these, although some of the materials have changed over the years.

Suzuki has limited runs all the time. Harmonicas aren’t exactly the most sought-after instrument globally, but it does have some of the most eccentric collectors. This harmonica sits in an F# tuning and features ten holes. Playing it is simple, and the sound is somewhat basic, but it’s about the exclusivity here.

There aren’t too many specifications on this harmonica, except that you can’t find too many F# Folkmasters for sale. The Folkmaster would rank more as a collectible than something someone would buy for performances.

Single key harmonicas aren’t expensive or sought-after… unless they’re hand-signed by the legend Bob Dylan. Hohner is expensive on their own, but they amped it up here with Bob’s signature and a record of authenticity.

The simple single key harmonica is in the standard key of C and doesn’t possess any special qualities, which is why it’s so impressive that the price sits at $5,000 at the time of writing this article. These aren’t exactly the kinds of harmonica to just float around in circulation, so the price will only accrue as time goes on.

Hohner does it better, and this impressive 23″ long harmonica packs a punch. While they pay special attention to quality, Hohner also included 48 chords for a complex range of sounds. The 48 chord Hohner is a harmonica built for a master player, but if you can genuinely utilize every piece of it, you’ll be able to make the heavens sing.

Quality above quantity is normally Hohner’s unofficial mantra, but here, they took a different approach. The 48 chord harmonica was manufactured years ago, so while there are still plenty in circulation, that number is dwindling as collectors snatch them up, continually driving the price up. If you don’t get your hands on one soon, they could end up being one of the top expensive harmonicas in the not so distant future (Tombo-level prices).

We can only assume this was affectionately named for Mozart, whose middle name was Amadeus, but since he wasn’t known for harmonica playing, the title here is a bit of a mystery. This harmonica keeps the design simple with a silver-and-gold style.

What’s fascinating is that this ended up being so expensive despite being in C’s standard key, primarily because Hohner is known for their quality and producing limited run harmonicas like this. It’s exclusive, it looks regal, and with extra-tight reed plates, it can retain its tuning for years to come without any adjustments.

Ranges will change the way a harmonica sounds. Not by small margins, either, but they can manipulate the entire sound. Suzuki is all about innovation, and this harmonica brings so many different sounds to the table. It’s also not highly manufactured, which explains the markup cost.

Even in industrialized categories like harmonicas, a lot of the assembly work must happen by hand. With circular holes, primarily handmade production, and a limited run, Suzuki made an heirloom-style harmonica that only a small number of people will ever get to use and truly enjoy.

We’ve established that Suzuki is one of the best manufacturers of harmonicas, but it doesn’t just stop at personal harmonicas. This bass chord harmonica has 48 chords—two rows of 24 each—and an intuitive design that doesn’t overwhelm you with a ridiculous size.

It’s a perfect example of the total cost relative to utility and usefulness instead of age or being popularized by a famous musician. With skill and just one of these harmonicas, you can create an acoustic orchestra all around you.

As you can see, people will pay top-dollar for top-tier harmonicas. Some have been discontinued, which is why their prices are so high. There’s a certain magic in owning an expensive harmonica with a compelling history; it’s like embedding yourself into the history of this age-old instrument.

You’ll notice that either Hohner or Suzuki makes most high-end, expensive harmonicas. That’s because they’re both some of the oldest harmonica companies in the world. Yes, Suzuki deals in hundreds of different products, and while they began much later than Hohner, they’ve still been producing harmonicas for over one hundred years.

We can also see that Dylan loved playing on Hohner harmonicas, which raises their price and marketplace value alone. Now that you know the most expensive harmonicas in the world, which one do you like the best? You can learn to play well on inexpensive harmonicas, but harmonicas today aren’t made the way they used to be. There’s something special about the sounds that come from a classic.

The 13 Most Expensive Ukuleles In The World